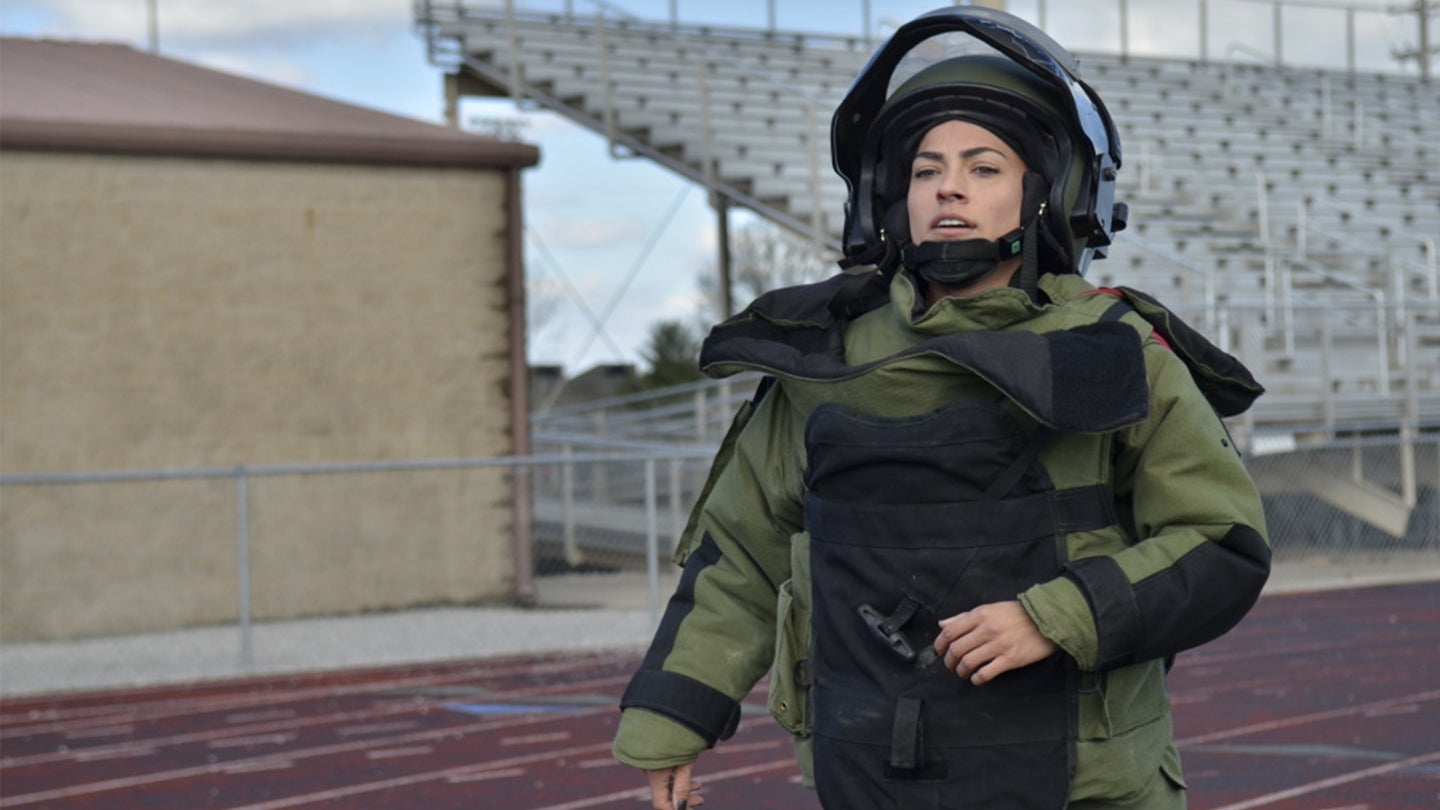 Running a mile may not sound so tough, but things get a lot harder when you’re wearing a clunky 84-pound blast-proof bodysuit and 12-pound helmet. That takes a few extra spoonfuls of determination, especially when you’re trying to break a world record while doing it. But that’s where Captain Kaitlyn Hernandez found herself when she was rounding the curves of the outdoor track at George Mason University in Fairfax, Virginia. on April 3rd. Hernandez was trying to beat the previous Guinness World Record for a woman running a mile in a bomb suit, and, needless to say, she crushed it: finishing in 10 minutes, 23 seconds and shattering the previous record of 11 minutes, 6 seconds.

“As soon as it was done it was kind of a whirlwind, so I didn’t really have a chance to take it in at first,” said the solider, who commands the Army’s 717th Ordnance Company, 52nd Ordnance Group (Explosive Ordnance Disposal), in a recent press release. “But I was very happy and excited. The whole process has just been great.”

To give a better sense of how difficult this feat is: an explosive ordnance disposal suit fully encapsulates the person wearing it and is designed to protect the wearer from blast threats. But all that protection comes at a cost, since the extra weight and insulation “puts individual wearers at significant risk of thermal strain and decreased work capacity,” wrote one Army study in 2015.

“The increased weight of the ensembles (e.g., >35 kg) add significant metabolic demands on the individual; while their capability to dissipate heat and maintain thermal homeostasis is virtually eliminated,” the study found.

Given those challenges, Hernandez started preparing for this record run more than a year ago. That meant hitting the track in the bomb suit once a week, on top of her regular CrossFit workouts. She soon found out that running in a bomb suit takes a certain amount of finesse.

“[T]he helmet’s definitely the worst part because if you’re leaning forward or backward it’ll take your whole body with you,” she said. “Overcoming that is more mental. It’s usually a split-second, any time I run and start feeling sorry for myself I just have to get over it and say it’s not that bad.”

The soldier was well-prepared for the event—she unofficially broke the previous world record several times in training. That bar was set by Hernandez’ friend and fellow EOD soldier Ashley Sorenson.

“Whenever EOD goes out in the bomb suits for a manual approach, it’s really important that we’re able to work and sweat in the suit and still be able [to] perform,” Sorensen said when she set the old record in Hawaii in 2013. “So making it a competition when we train helps with that. Running a mile like this is definitely a challenge.”

The captain also had sage advice from Sorenson to keep her focused.

“She was able to give me some advice—just to try and stay calm and remember it’s only four more laps,” Hernandez said. “Once somebody put that in perspective, in my head I knew that I only had to run four more laps, and for the rest of my life it’s done.”

Read the rest of the article over at Task & Purpose.