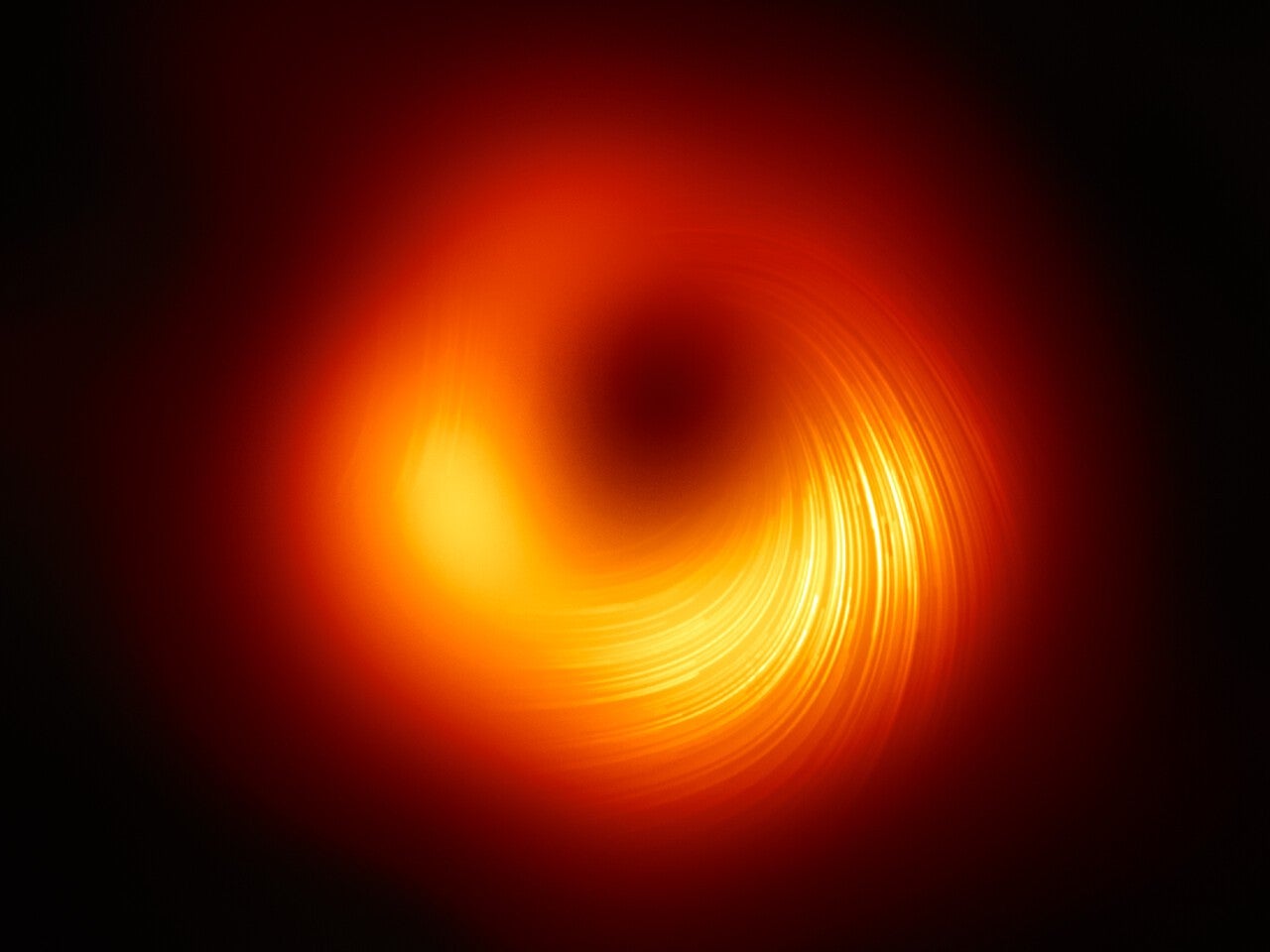 It's kind of like looking at a supermassive black hole with sunglasses. Event Horizon Telescope collaboration et al.
SHARE

Despite harboring deep conceptual mysteries, black holes are the simplest of the universe’s big objects: Some spin. Some have electric charge. And all pack their mass densely enough to go fully dark, exerting a gravitational pull that traps even light. They offer little to measure and even less to look at.

But real black holes, particularly the supermassive beasts lurking at the hearts of most galaxies, are anything but dark and straightforward. The first photo of a black hole wasn’t constructed until 2019, and astronomers had to use a network of telescopes spanning our entire planet to get it. That particular black hole lies at the center of galaxy M87, amid a roiling vertex of hot gas located 55 million light years from Earth. It was truly a feat to photograph, because the object is a bright but tiny pinprick in the sky.

[Related: What would happen if you fell into a black hole?]

Despite occupying an area comparable to our solar system—roughly 0.02 light years across—M87’s black hole fires out powerful jets of particles stretching 10,000 light years above and below. These jets burn energy roughly as quickly as all the stars in our galaxy combined.

“This is the most powerful process in the entire universe,” says Sara Issaoun, an astrophysicist at Radboud University in the Netherlands and member of the collaboration that photographed M87’s black hole. “And we still don’t really know how that happens.”

Now, we know a little bit more. Issaoun and the other three hundred or so researchers who make up the Event Horizon Telescope (EHT) collaboration are back, two years and a pandemic after their international debut, with an updated image. The fresh snap captures a previously invisible side of the black hole, a forcefield thought to be responsible for launching the universe’s mightiest jets.

“It’s beautiful data,” says Enrique Lopez Rodriquez, an astronomer at Stanford University who specializes in supermassive black holes and was not part of the research. “They measured for the first time the magnetic field near the event horizon of the black hole.”

In a reality where gravity was the only force, black holes would stay much darker. But the fact that they spray particles at nearly lightspeed across entire galaxies strongly suggests that something else is involved. “Gravity alone can’t explain it,” Lopez Rodriquez says. “You need another force.”

Researchers have believed for decades that magnetism, the only other force that can exert such large effects over vast scales, must be responsible. But next to gravity—which astronomers can watch push around stars and galaxies—magnetism is basically invisible. Short of firing off a bunch of fridge magnets and watching them drift, researchers can discern distant magnetism only through the movement of charged particles, like electrons and protons.

The tire-shaped cloud surrounding M87’s supermassive black hole is largely made up of plasma, matter whose atoms have been ripped apart into a collection of just such charged particles. As the black hole’s magnetic field sends them spiraling, they shine with light that ripples in particular orientations, or “polarizations.” When that polarized light reaches the EHT facilities on Earth, millions of years later, collaboration members can reconstruct a rough map of the magnetic field that the particles passed through.

[Related: Here’s the first-ever direct image of a black hole]

The effect is subtle. The new image is based on the same data as the famous 2019 black hole image, but with a filter applied to select only polarized light. It’s a bit like looking through polarized sunglasses.

The collaboration members actually first saw the polarized pictures just three months after the original image’s public release. But the EHT’s instruments let in polarized light from nearby too, and checking that the researchers had properly sorted terrestrial photons from black hole photons took time.

“The entire two-year process was really spent on trying to make sure what we see is real,” Issaoun says.

After developing five methods to quintuple-check their filtering, the collaboration feels confident that the polarization is legit. They published their results Wednesday with two reports in The Astrophysical Journal Letters.

The polarized image proved unexpectedly revealing. The collaboration’s theorists ran 40 simulations on supercomputers (each taking about a week’s time), to generate 3D videos of black hole behaviors. Then they considered other variations—such as different electron speeds and various viewing angles—to get 70,000 plausible mappings of the black hole’s magnetic field. Finally, when they compared these theoretical images with the actual picture, just 72 matched.

“To narrow down the [possible behaviors] so dramatically was very surprising,” says Andrew Chael, a Princeton University astrophysicist and EHT member.

The surviving simulations highlight broad features of the black hole’s magnetic field and address a long-standing debate about the origins of jets.

Magnetic fields and the birth of black hole jets

A very strong field would point stiffly outward from the plasma disk, like pretzel sticks stuck into a donut. A weak field, however, would get churned up with the plasma to form a swooping circle pattern. The EHT collaboration saw something in the middle: a spiraling field of respectable strength that they estimate at between 1 and 30 gauss, the unit of measurement for magnetic flux density. That would mean the M87 black hole has a magnetic field dozens of times stronger than the Earth’s.

The strength of the magnetism swirling around M87’s supermassive black hole suggests that its field is launching the jets in a specific way known as magnetic arrest.

Magnetic fields arise from the movement of charged particles—fridge magnets stick because their electrons spin together. So as plasma spirals toward the black hole’s equator, the magnetic field around the equator strengthens. As the field piles up, it “arrests,” or halts, the influx of further charged particles, and eventually it gets so intense that the force field spills out above and below the black hole, expelling the jets. The new polarized image suggests that this violent extrusion is what’s going on at the heart of M87.

“The pure detection is really amazing,” Lopez-Rodriquez says. “It starts answering a very critical question: How the jet is formed.”

“We’ll learn a lot of lessons trying to make that connection,” Chael says.