She studies how our brains create accurate representations of the world 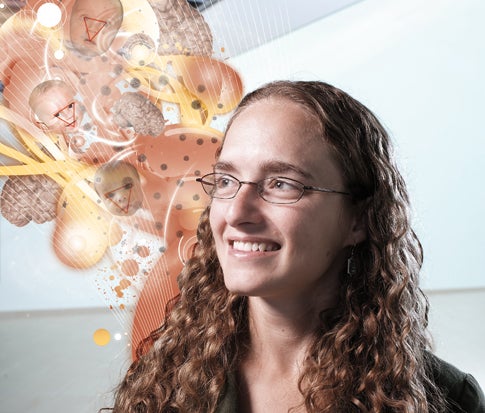 In a small room on the second floor of the Boston Children’s Museum, six-month-old Hasan Helal is watching a short video. Underneath the screen, an infrared device tracks his eye movements, which appear as small red dots superimposed on a second video screen behind a curtain a few feet away. Most infants fixate on bright objects, but Hasan is unusual: He already prefers faces, his eyes tracing the characteristic triangle shape — left eye, right eye, mouth, left eye again — that older kids and adults make when they examine a new face. He has begun the lifelong inquiry into what others are thinking.

Rebecca Saxe uses the boy’s eye movements as a window into that process. This philosophy-student-turned-scientist wants to answer the big questions: How does a brain deal with the information coming in through the eyes and ears? How does it turn that information into thoughts that we then act on? She’s asking how our minds create accurate pictures of the world — a centuries-old riddle now being probed with the tools of a neuroscientist.

Saxe is starting on those overarching questions by investigating one specific case: How do we come to know the thoughts of others? In 2005 she ended a decades-long argument among neuroscientists when she showed that there’s a specific part of our brains dedicated to thinking about others’ desires (many had doubted that a single region could have a function at once so specific and so abstract).

There are other means of prying at the problem, too, which is why Saxe has the Playlab. There, in a building literally crawling with potential subjects, she studies how and when babies start seeking out and responding to people. “In some sense, babies become essentially human when they begin to interact socially — to look at faces, to smile and react, to point and share attention,” she says. As soon as she knows approximately when infants turn into social beings (she has a rough idea but wants to narrow it down), she will study babies at that age to tease apart what young brains go through as they learn to think of others.

Although Saxe’s work has practical implications — it may lead to early-diagnostic tests for autism, for example — she’s more interested in the big picture. Any modern investigation into how we think must illuminate why we’re so bad at it. “We’re totally committed to a view of how the mind works,” she says — in short, we believe people are rational — “but most of the time, human behavior isn’t based on an explicit, rational, considered decision.” And our irrational tendencies are all too apparent. “[The mind] makes us make systematic mistakes over and over again, as individuals but also as societies, in how we mete out punishment and who we value, and who we think is good and who we think is bad, and how we try to change behavior for better or for worse,” she says. “Maybe we can prevent ourselves from making those same mistakes again and again and again. That would be success.”