This essential survival tool can save your life 10 different ways 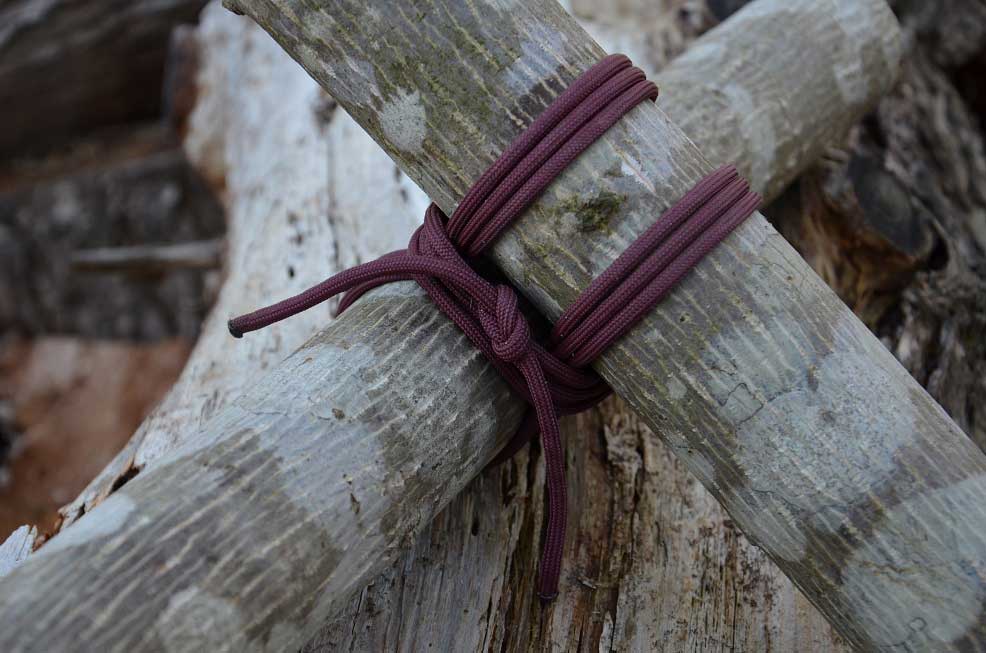 If you happen to have some paracord and some waterproof material, you can create a shelter using just a few lashings. Tim MacWelch
SHARE

Parachute cord, which is sometimes called paracord or 550 cord because of its 550-pound breaking test, was originally used for parachutes during World War II. But once on the ground, creative soldiers found hundreds of uses for the sturdy cordage, including bootlaces. Cotton and leather boot laces are simply no match for paracord’s breaking strength, high knot strength, or durability, then or now. As the years passed, paracord became a common civilian commodity. These days you can find this stuff anywhere. It’s lightweight, inexpensive, and expendable. It’s also a great item in a survival situation, which is why there should always be a few yards or more in your pack—you’ll be glad it’s there when you need it. Here are a few ways you can use one of the greatest braids ever created to your advantage.

Imagine you’ve been kidnapped and bound with zip ties! Good thing your paracord laces do more than just hold your boots on your feet. You can use those laces as a saw. Aggressively working 550 cord perpendicular across a zip tie will weaken the plastic until it eventually breaks. To make your escape, remove your 550 laces and tie them together to make a single, long cord. Then tie a loop large enough to fit around your feet on each end. Thread the cord through the zip tie. Place each foot in one of the cord loops and move your feet back and forth like you’re peddling a bike. This will saw the cord back and forth on the zip tie and create enough friction for the plastic to get hot, and eventually melt and separate.

If you’ve melted the cut ends of your paracord (which is a great way to keep it from unraveling), you already know the material is somewhat flammable. Whether your cord is made from nylon or polyester, both plastics will burn once they are hot enough. But for one enterprising company, “sort of flammable” wasn’t good enough. Their product, 550 FireCord, has an additional flammable red strip in the core. You can strip the red strand from a cut piece of cordage to yield flammable tinder, or leave it in place to help a strand of 550 burn even better. For best results, cut a short section of FireCord and remove the red strand. Light it with an open flame and use it as tinder to kindle some other fire-starting materials like a bundle of dry twigs and dead leaves.

3. Keep bears out of your food supply

One of my favorite uses for 550 cord is when I need to suspend my food cache high in a tree. In backcountry areas where bruins and other animals want your food, hanging it in a tree downwind of camp will keep it out of reach and reduce nighttime animal prowlers around your tent. To hang your food, tie a rock to one end of 100 feet of 550 cord and throw it over a stout tree branch while holding the other end. Untie the rock, work the cord down the length of the branch until it’s at least five feet from the tree, and then tie one end to your food sack. Hoist the bag up until the cache hangs at least 12 feet off the ground and five feet below the branch. Then secure the loose end of cord to a different tree and retrieve it all the next morning.

Though it’s engineered to reduce exterior friction, paracord can still make a suitable bow string for the bow and drill fire-starting method. Because of the designed slipperiness of 550 cord, I recommend using two strands of cord twisted around each other for a bow string. This places more traction on the drill and helps with the operation of the kit. Try your hand at it by selecting dead, dry softwoods like cedar, paw paw, or willow for your drill and board. And if you’re not a fan of two-ply cord on your bow drill, try the Arctic version with an extra-long single strand for the bow. Wrap the cord around the drill twice or three times (without overlapping) and you’ll double or triple the traction on the drill.

If you find yourself stuck in a survival emergency and you need to acquire food, consider hunting by bow and arrow. It’s easy to build the tools you’ll need to take down small-game animals. You can build your archery equipment with a sharp fixed-blade knife, some paracord, a flexible sapling, a few tree shoots for arrows, and a few feathers. Select a dead, dry hardwood stave for your bow, and pick some shoots or sucker growth for the arrow shafts. Remove some of the seven-strand core from a cut piece of cord to fletch the arrows. Cut the arrow shafts to your preferred length, cut a nock in each, sharpen the arrow to a point and fletch with “same side of the body” feathers, keeping right wings together and left wings separate. String your bow, see how it bends, unstring it, and do some tiller work—the process of carving the belly of the bow to make the bending limbs match. When you’re satisfied with the bow, untie one end of the bow string and twist the paracord to tighten it and remove some of its elasticity. Retie the cord while it is under tension from the twisting, and you’re ready to shoot.

The next skill set down from hunting with primitive archery tools is trapping. Setting traps can be a useful backup strategy for nourishment in a survival situation, and it frees up your time to accomplish other tasks. You can use a solid 550 cord strand on snare nooses and triggers. But don’t forget you can remove the inner cord strands and use it for smaller trap parts, like the string on a Paiute deadfall trigger mechanism.

While a thick, white fishing line will rarely hook a crafty fish in clear water, you may have a chance in murky water using one of the strands in the seven-strand core of paracord. Stink bait, a sharp hook, and a strand of 550 core line might just land you a catfish or some other “non-picky” eater. You can fish this setup as a hand line, but tangles are inevitable. You’ll have better luck, and lower your blood pressure, if you sit back with your line tied to the end of a sapling pole and do some good old fashioned worm dunking.

Short bits of paracord may seem like trash, but they can become surprisingly nice fishing lures with just a little bit of work and a sharp hook. Cut off a small piece of cord, slide part of the outer jacket down, and cut it off so more of the white core strands are exposed. Slide the shank of a fish hook up through those strands until the eye emerges, then melt the end of the cord around the hook eye with a lighter. Shred the exposed white strands and your lure is ready for the water.

Technically the bola is an impact weapon, but its other great feature is its ability to entangle a target. A lucky strike with this weapon will stun (or even kill) your quarry, but if that doesn’t work, the cords may ensnare it long enough for you to rush in with a blunt object or knife and finish the job. A bola with three, four, or five weights is most commonly associated with hunting large birds like geese since their hollow bones are particularly vulnerable to strikes and their wings are susceptible to entanglement.

To make a hard-hitting bola, use an overhand knot or a figure-eight knot to join three to five cords together. Each section of cord should be between 2 and 3 feet long. Next, collect stones for your weights. They should weigh about 6 to 8 ounces each. Round stones are best because they are less likely to cut through the covering. Wrap your stones in leather or wet rawhide. Pierce a few holes in the edges of the rawhide and fasten each cord to a weight. If you are using rawhide, allow it to dry completely. It will shrink and harden, and hold your weights securely. The final step is to use the weapon. Hold the knot that joins the cords with your dominant hand, whip the weights over your head, and hurl the bola toward your target.

Another way to use your paracord is to rig a shelter with it. Whether you forget to pack your tent guy line, or you are improvising a tarp shelter from a scrap of parachute or sail cloth, this strong cord will help you build a dependable structure. From lashing poles together to using it as guy line, this rope works well in most conditions. And if you decided to pull the core out of the 550 cord, you can multiply the number of strands you have to do other shelter tying jobs.