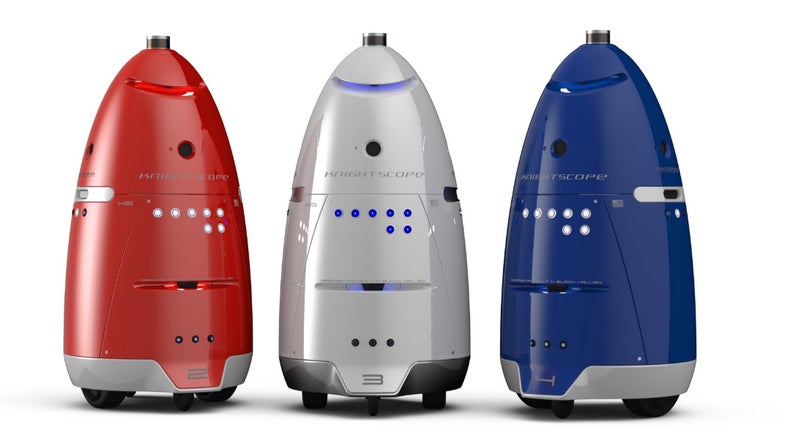 Robocops may be a ways off still, but robot security guards are already here. Security robot company Knightscope has two different guard bots, both of which look like Daleks designed by Tim Cook-era Apple. Slick, bulb-shaped machines, they bristle with cameras, sensors, and lights, and are covered in white plastic. Uber previously tested some Knightscope robots as parking lot guards, like mobile security cameras scanning for people and reading license plates. Now, Knightscope is dreaming bigger, and looking for investors online.

Using the “equity crowdfunding platform” SeedInvest (think Kickstarter, only for shares of a startup instead of extra pieces for a new boardgame), Knightscope is looking for capital. From Knightscope’s pitch:

That’s certainly ambitious, though one wonders how inspired the project can be by 9/11 if the team wasn’t formed until April 2013. (Sandy Hook is a least a timely touchstone, even if it’s unclear how an unarmed guard robot could have stopped an elementary school massacre). In the pitch deck, a series of slides designed to sell the company to investors, Knightscope has another target in mind: the human cost of existing security systems.

One slide in the pitch deck compares the costs of 24 hours of coverage by three shifts of three human security guards, versus 24 hours of coverage by two knightscope robots and three shifts of one human guard. The Knightscope robots, billed at $7/hour, are significantly cheaper than security guards, billed at $25/hour. The slide concludes that the Knightscope team costs $936 for 24 hours of security, compared to $1,800 for the team of only human guards.

If the robots can’t cut crime by 50 percent, a feat accomplished by almost nothing in history (except possibly the removal of lead from gasoline), then Knightscope at least aims to reduce the cost of protecting against crime by almost 50 percent. Provided, of course, that they can figure out how to avoid running into toddlers.