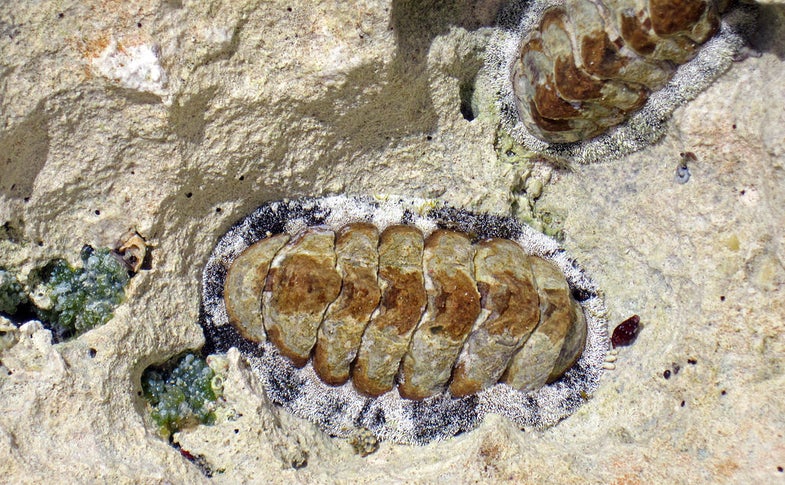 Tough armor is great at protecting creatures from predators. But one little marine mollusk has armor that’s even more useful. In fact, its armor doubles as eyes.

Now, eyes are not known for being tough: You can scratch them, jab them, they’re soft little orbs. And notably, they’re made of organic materials. Not so for the Acanthopleura granulata. This species of chiton has hundreds of tiny eyes dotting the plates that protect it, and the lenses are made of inorganic material. Where eyes are typically made out of protein, chiton eyes are made of a transparent aragonite, which is the same hard, ceramic material that its tough shell is made out of. The lenses, however, were made of larger aragonite crystals than the rest of the armor. 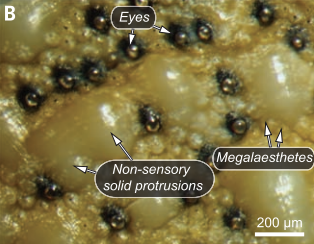 Microscope image of Chiton eyes within the armor

Scientists have known that these armored lenses exists for a while. But now, researchers at MIT, University of South Carolina, and Harvard have discovered that the eyes can actually see. That means the eyes perceive images, rather than just being able to perceive light. The scientists used high resolution microscopes and crystallography to understand the 3D structure of these unique eyes. In doing so, they discovered photoreceptor cells that help the creature focus images in their nervous system (since they lack a central brain).

MIT says that understanding how these eyes work and the materials that make them up could lead to manmade materials that are both protective and perceptive of their environments.