Despite the fact that optical cables transmit data far faster than copper wire, wire is still the primary medium for... 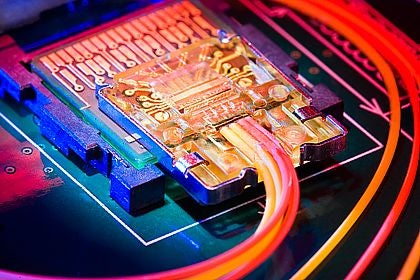 Despite the fact that optical cables transmit data far faster than copper wire, wire is still the primary medium for communication on computer chips, and between computers and devices through USB cables. But Intel hopes to change all that soon with their new Light Peak connection system.

Debuted yesterday at the Intel Developer Forum, Light Peak uses four inexpensive fiber-optic wires, each of which can carry ten gigabits* of data per second. The system included the development of both the wires, which needed to drop in price to make the system affordable, and the chips, which encode and decode information in light form on both ends.

Intel wants to start shipping the devices by sometime next year, but it must first overcome the hurdle of standardization. Without the companies that design the software, computers, and peripherals on board, Intel will be left with a very fast wire it can’t actually connect to anything. In many ways, standardization is even more difficult than the development of the technology itself. So even while this technology may mark the beginning of the final move away from copper wires, we’re probably going to be stuck with USB cords for some time to come.