Carbon nanotubes have improved existing technologies in fields ranging from electrical circuitry to architecture to materials science. So is it... 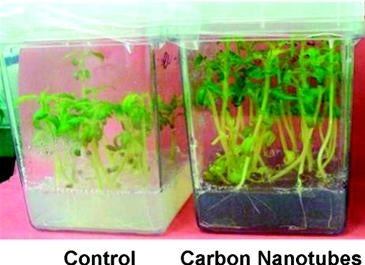 Carbon nanotubes have improved existing technologies in fields ranging from electrical circuitry to architecture to materials science. So is it any surprise that when researchers in Arkansas applied the miraculous microscopic structures to tomato seeds, the plants grew faster, stronger, and more plentifully?

The nano-enhanced seeds experienced an increase in germination percentage and better seedling growth, likely due to increased water absorption. Though findings are preliminary, the seeds exposed to nanotubes contained more moisture, which appears to be the catalyst behind their enhanced growth.

On its face, the discovery means carbon nanotubes could potentially unlock a new breed of fertilizers that spur growth in food crops without introducing chemicals to soil and nearby water supplies. Moreover, enhanced growth means enhanced biomass, which could spell big implications for the biofuel arena.

But increased food supply and better biomass doesn’t come without its drawbacks. The effects of nanotubes on the environment aren’t very well documented. Specifically, the way they might move through the food chain could pose problems down the road. Some single-walled nanotubes are toxic to some insects; testing on mice has found multi-layer nanotubes (like the kind used in the study) have carcinogenic effects similar to those of asbestos. Suffice it to say, the golden age of carbon nanotube farming isn’t upon us just yet, but the potential is there, and not just for bigger tomatoes.