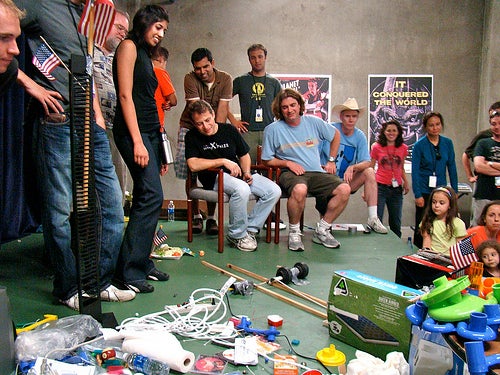 University grads everywhere may feel pressure to succeed, but the stakes ramp up when your school’s co-founders include AI visionary Ray Kurzweil and Peter Diamandis of the X Prize Foundation. Now recent grads of Singularity U have announced their strategies for using emerging technologies to help one billion people over the next 10 years.

Four teams of grads proposed ideas ranging from a disaster response network to an intelligent transportation grid. The San Francisco Chronicle reports that the 40 students of the Silicon Valley school include recent college grads and company CEOs, and that many have advanced degrees from the likes of Harvard, MIT and Stanford.

One Global Voice envisions modular programming tools that anyone can use to create cell phone applications to boost education and commerce among the developed and developing worlds. The idea relies on the rapid spread of cell phones among even poorer nations, and perhaps the rampant success of iPhone applications.

Gettaround wants an intelligent transportation grid that can boost energy efficiency. That would start with a marketplace where car owners can lease their underused vehicles to renters, and could even use sensors and cell phones to create travel updates in real-time.

Domus 3D Printing looks to scale up 3-D printing technologies, which have already begun creating items from silicone and even stainless steel. The end goal involves creating affordable and customizable housing on a mass scale.

Finally, XIDAR hopes to create a communications network for disaster response situations. That might include smart phone applications with GPS-based guides for evacuation, and “eTriage” bracelets that transmit vital signs of injured victims to medics and physicians.

Some of the ideas may not remain mere visions for long. The teams presented their work on Thursday at the NASA Ames Research Center in California to a crowd of venture capitalists and business leaders. Both NASA and Google also had representatives in attendance, given their backing of Singularity U.

Would-be future leaders may want to start dusting off that CV and apply to the next class — just don’t get discouraged by the four-percent acceptance rate. But then again, PopSci has found that some inventors don’t even wait until college to start cranking out the ideas.