Germans (Who Else?) Develop Un-Skunkable Beer 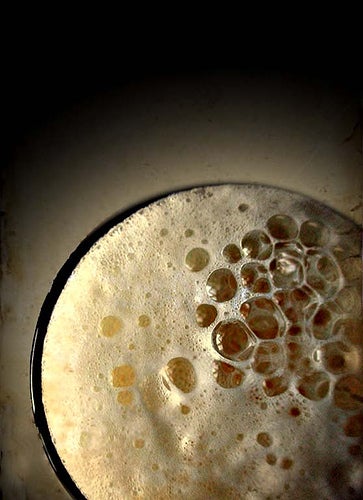 If you like beer, then perk up those ears, for we have news of an innovation – brought to you by, who else, the Germans – that could lead to longer-lasting brews. The development in question is a polymer that extracts riboflavin, a micronutrient found throughout beer and other beverages that promotes spoilage when exposed to light.

The reason lies in a process called photo-oxidation: when light passing through a translucent container (like that Hoegaarden bottle in your fridge) combines with riboflavin, a chemical reaction ensues that changes the flavor of the ale and decreases its shelf life.

And so, to maintain beer freshness for longer, researchers at the Technical University of Dortmund (commissioned by beer giant Heineken, much to the chagrin of many Germans I’m sure) designed a polymer that, when dipped into beer, can trap and remove the riboflavin molecules by attracting them into crevices molded to the shape of the micronutrient.

That’s the good news. The bad news is that while riboflavin may be bad for beer, it’s actually a pretty important part of our diet. A deficiency of Vitamin B2 (as it’s also called) leads to such horrors as mouth ulcers, inflammation of the lining of the mouth and tongue, cracks at corners of the mouth, and cracked lips. In other words, if you plan on drinking riboflavin-free beer, make sure you’re getting enough riboflavin via other means (i.e., meat, eggs, mushrooms).