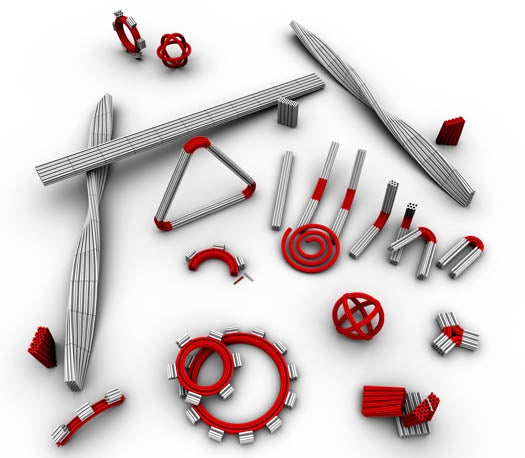 In the macro world, the construction shapes available to us are numerous, and the tools to build them are straightforward. But nanoarchitecture has always been much more limited — first to two dimensions, then to only certain kinds of three-dimensional shapes. This week, scientists have broadened the possibilities for nano-building, programming DNA to bend itself into complicated custom curves. The researchers revealed their creations in the current issue of Science: a group of tight little gears, tubes, and a wireframe ball.

DNA, a preferred material for nanostructures, can be programmed to shape itself. Outlining their designs on a computer, the scientists — Hendrik Dietz, Shawn Douglas, and William Shih of the Technische Universität München in Germany, the Dana-Farber Cancer Institute, and Harvard Medical School — arranged DNA molecules in a honeycomb lattice shape. Adding base pairs on some sides selectively, they were able to make the DNA structures bend themselves down to a super-small curvature radius of only 6 nanometers.

The larger plan, the researchers report, is to eventually use these cogs and gears to create the more complicated nanostructures that require such precisely curved components. Those nanostructures could range from tiny nanoantennae and nanoscale circuits, to complex drug delivery vehicles. The ability to program self-assembling, complicated 3-D components is a key step toward that goal.