Lab-on-a-Chip Can Carry Out Over 1,000 Chemical Reactions at Once

Labs-on-a-chip are generally so specialized and specific in what they do, it’s futile to try and explain what makes them... 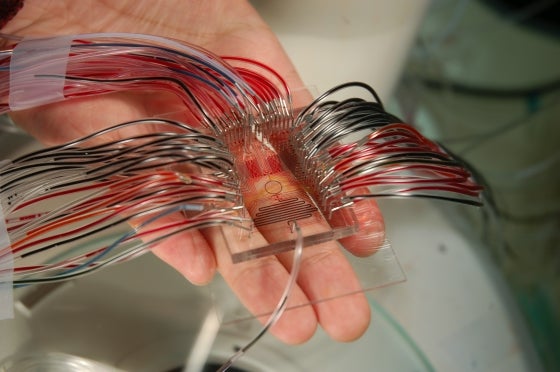 Labs-on-a-chip are generally so specialized and specific in what they do, it’s futile to try and explain what makes them particularly special. But in the case of this LoC from UCLA faculty, here’s what you need to know: it can carry out upwards of a 1,000 different reactions simultaneously, when most others can barely do two or three.

Labs-on-a-chip are often a scientist’s best friend: plug it in to a computer, and complex experiments that used to take days (or longer) are automated in significantly less time. Most LOCs can perform a handful of simultaneous reactions, but UCLA’s new lab can perform 1,024 reactions at a time, making drug development faster, easier and cheaper.

In the tests, the research team sought to find which drugs were most effective inside certain types of proteins. This specific lab-on-a-chip uses microfluidic technology to route trace amounts of liquids around the chip, and performs the reactions and analysis with the help of in situ click chemistry and a mass spectrometer. With the new LOC, 1,024 variations of a drug molecule can be tested on the same protein at once.

In addition to using less physical resources, a thousand of these reactions can be carried out in just a few hours, which UCLA says saves more time (and subsequently, money) than ever before. Furthermore, the team thinks the increased speed and efficiency of testing drug variations will be especially suited to developing cancer treatments. [UCLA via Gizmodo]