The next generation of semiconductor technology could take a page from nature’s book, letting DNA do the heavy lifting. Straight-laced... 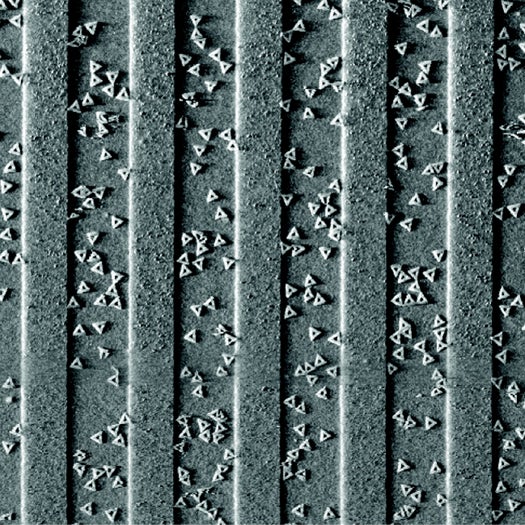 The next generation of semiconductor technology could take a page from nature’s book, letting DNA do the heavy lifting. Straight-laced researchers at IBM, afraid of breaking Moore’s Law, have figured out a way to combine lithographic patterning and DNA self-assembly to create semiconductors that built themselves into chips that are smaller, more efficient and less expensive than anything made conventionally.

Building microcircuits on the face of a silicon chip is a very precise, and therefore costly, process, and finding ways to cram more and more circuits onto smaller and smaller chips has driven the cost of increasing computing power skyward. But IBM’s team, in conjunction with California Institute of Technology researchers, think they’ve figured out a way to coax DNA molecules into self-assembling the necessary nano-structures to pack increased power onto less silicon, without the use of an army of costly machines.

DNA origami—in which a long strand of DNA is folded using shorter “staple” strands—is difficult to control, usually occurring in solution and bending to its own whims rather than into the highly ordered patterns needed to build circuitry at the nano level. Using electron-beam lithography, the researchers created special binding sites on silicon and other chip-making materials. These binding sites are patterned in a way that is conducive to micro-circuitry, creating a lattice on which the DNA molecules self-assemble in a pre-determined way. The DNA nano-structures in turn serve as a scaffold upon which other nano-structures—carbon nanotubes, nanowires, etc.—can be built at scales significantly smaller than those achievable with conventional machining methods.

If researchers can scale the technology to mass-produce chips (they’re already making tiny nanocar parts), they’ll be able to churn out more computing power far more cheaply than they can now. That’s the spot-on definition of “more bang for your buck,” and it just might open up a new era in computing. Don’t throw out your old desktop just yet though; the team still needs several years to refine the process and scale the technology for mass production.