Before its planned end-of-life crash landing, which it broadcasted dutifully in HD, Japan’s Kaguya lunar craft used its gamma ray... 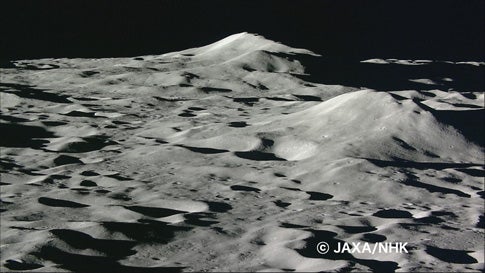 Before crashing to the surface last week, Japan's Kaguya probe sent back a series of seven high-resolution images just a few thousand feet above the lunar surface. Return to Article. JAXA/NHK
SHARE

Before its planned end-of-life crash landing, which it broadcasted dutifully in HD, Japan’s Kaguya lunar craft used its gamma ray spectrometer to find the “first conclusive evidence” of uranium on the lunar surface.

Robert Reedy – a scientist involved with the project though the Planetary Science Institute in Tuscon – told Space.com that the team “has already gotten uranium results, which have never been reported before. We’re getting more new elements and refining and confirming results found on the old maps.”

If the surface uranium is abundant, it could fuel nuclear power plants on the moon, making long-term operations on the surface more feasible.