Now You See It, Now You Don’t

Sleight of hand meets neuroscience in a one-night-only collaboration 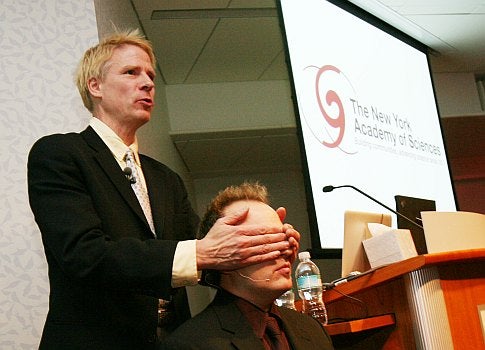 Watch out, neurons, there’s stuff that we just can’t see—or process—in the magician’s toolbox (and in real life). Sure, the top hat, rabbit, and colorful scarves are hard to miss. But they’re also used to distract us—and to focus our gaze away from other activities.

The combination of magic and science drew a few hundred people to the auditorium of the New York Academy of Sciences for Science & The City’s third installment in a series on the five senses.

“See What You’ve Been Missing: The Science of Vision” featured a professor of biology and engineering brought face to face with a man who pickpocketed the Secret Service during a visit with President Carter. Prestidigitation was also part of the show.

The two-part presentation was a lively dialogue between science and magic and a candid look at how what’s going on in our brains—and what’s going on in the brain (and the hands) of the prestidigitator—makes it hard to see the whole picture.

Christof Koch examines how consciousness is linked to the brain. He is a professor of biology and engineering at the California Institute of Technology.

Apollo Robbins is a Las Vegas-based self-professed “honest thief” whose performances use pickpocketing and sleight of hand to demonstrate shortcomings in human perception. And, yeah, he takes stuff. Robbins pilfers Blackberries, wristwatches, and wedding rings as part of his act, but returns them all to their rightful owners at the end of the show. Really.

At the start of the evening, Robbins gave his subway card, signed for identification purposes, to one member of the audience and asked him to hide it on another person in the audience. Then Robbins circulated in the crowd and tried to get the card back.

Unfortunately, you can’t use insider knowledge to stop all thieves, but gaining insight into how they work (and how the brain does) can’t hurt. The evening offered a quick look into how human vision works (see next page). 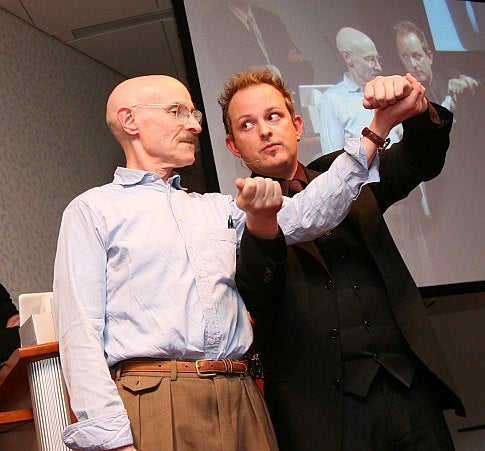 On Your Mark, Get Set, See

Vision is an active process. The brain uses more energy than any other organ in the body. About a third of it is consecrated to vision. Koch says the brain has evolved to construct a description of what we see, using all sorts of constraints.

“It’s not that you open your eyes and passively there’s all that information that streams into your eye and gives you a description of the environment,” says Koch. Your brain constructs a description of the world. Most of the time it works. Your sense of sight keeps you out of danger and in contact with the world around you. But one percent of the time, or less, your eyes fail you. Enter the magician.

There are also visual enigmas in real life. Take a look at the Necker cube, named for the Swiss crystallographer Louis Albert Necker, who first published it in 1832. The lines of the figure exist on a single plane, but create the illusion of a three-dimensional object, a cube.

Be Careful What You Look For

Vision is selective. Optic nerves connect the eye to the brain and convey massive amounts of information, but the brain can’t deal with the deluge in real time. So we can only really see what we’re focusing on.

“Most of what we don’t attend, we don’t see,” says Koch. That means if attention is not focused right in front of you, you may not notice someone there at all. It’s entirely possible that the ex who walked right by you on the street didn’t say hi because she or he simply didn’t see you. (Insert your own conclusions here.) That’s also how a magician can get away with, say, flinging a tissue over your head to “make it disappear” in a sleight-of-hand trick. (The audience member for this demo caught on to the trick, but Robbins was doing it extra slowly and the audience contributed hearty bouts of laughter.)

Never, Ever Change (Or So We Think)

Vision is not a static system. We move our eyes three to four times each second, “as often as the heart beats,” says Koch. It takes 30 to 50 milliseconds for each eye movement, but instead of tracking the movement of that change, our brain performs the equivalent of post-production and splices in some new footage. In a single day, each of us will experience a total of 20 to 40 minutes with no visual input, but we don’t notice.

On a smaller scale, unregistered eye movements can make it difficult to perceive slight changes in our field of vision, especially if we are not focused on the area where the modification takes place. The phenomenon is called change blindness. It doesn’t have anything to do with our President-elect—it refers to a human inability to notice certain alterations in the visual field. Here’s an example that Koch shared.

Take a look at this image of soldiers boarding a plane. Keep looking as the image flashes back and forth between two nearly identical scenes. There’s one difference. Can you find it?

Don’t worry if you don’t see it right away. It took me several moments to figure out, even with a hint.(Hint: One of the two images is missing a piece of essential equipment.)

Of course, the same principles operate in the realm of magic. And sleight-of-hand artists prey on them. Here’s Robbins again—give him a hand, folks—explaining how he tricked one audience member with a disappearing coin trick. (Robbins placed the coin on his subject’s shoulder and on his own head for brief intervals during a sequence of quick hand movements.)

Now, give yourself a hand—and get some cucumber slices for those eyes.