Does Santa Have a New Sled? Is Rudy Juicing? 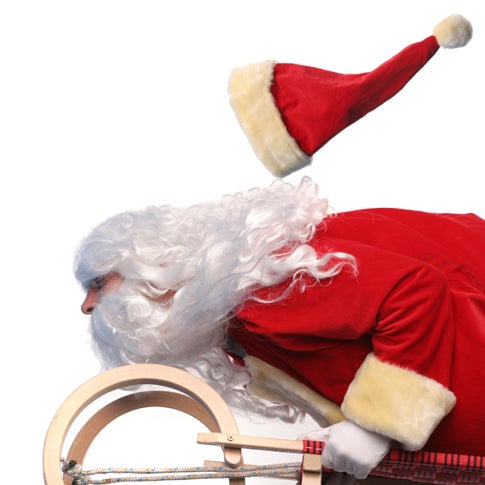 Santa’s leaving his workshop at the North Pole a little later this year, two hours later to be exact, according to reports out of NORAD. Have that many kids landed on his naughty list? No, says Naval Lieutenant Desmond James, spokesman for Santa tracking at the North American Aerospace Defense Command. “Kids are staying up later nowadays, so in past years Santa has had to double back a few times to make sure he’s hitting houses after they’ve gone to bed,” he says, citing an inside source at the North Pole. “He’s just streamlined his efforts.”

Ha! Sounds like a military-Santa cover-up to me. So I pinged my own North Pole insider, who identifies himself as Patches the Elf, for the real scoop.

“Santa’s keeping things under tight wraps, but I’ve heard the reindeer have been juicing,” Patches says. “I don’t know what he’s feeding them, but they’re doing Mach 6 at a trot. I’ve never seen such a bad case of antler burn (from the air friction, of course).”

According to Patches, the happy little mechanic elves in charge of maintaining Santa’s sleigh locked themselves in the barn a few weeks ago after receiving a large crate stamped “EXPERIMENTAL.” “From what I’ve heard from the mice—yes, I’m an elf, so I can talk to the mice that scurry in and out of the barn—Santa’s upgrading the sleigh with one of those scramjet engines. That’s why the reindeer are juicing—he needs them to get up to Mach 6 so the scramjet can take over and propel him to Mach 15. At least that’s what I’ve heard.”

Whatever happened to good ol’ magicks? Of course, even this could be part of an elaborate military cover-up to keep people from watching the skies while they test fly experimental aircraft.

Conspiracy theories aside, you might, by now, be asking “Why does NORAD, typically tasked with watching out for nuclear attacks, even track Santa?” Well, it’s a funny story. All the way back in 1955, a newspaper in Colorado Springs printed an ad (for Sears, James thinks) that listed a telephone number for kids to call in and speak to Santa and find out where he was on December 24th. Nice thought, but the paper printed the wrong number, and children began calling into the Continental Air Defense Command, and early iteration of NORAD. Colonel Harry Shoup answered the call, James says, and instead of telling the child he had the wrong number, he said “hold on, let me find out for you,” and so began the tradition.

Tracking Santa is no joke, James says. “It’s a four-step process, and we use much of the same technology as we do in our day-to-day operations.” First, radar picks up movement at the North Pole, and indication that Santa is on his way. Second, satellites pick up the heat signature off Rudolph’s bright red nose. Third, NORAD, through a partnership with Google, attains visual confirmation using hundreds of “Santa Cams” placed in strategic locations around the world (note: NORAD doesn’t use this particular technology to track missiles). Finally, as Santa crosses into Canada and then into the United States, he gets an escort from a CF18 Hornet (Canada) and a couple F15 and F16 Eagle and Falcon fighter jets. “Santa flies really fast,” James says. “He slows down, says a quick hello, the picks speed up again. He’s gone in a flash.”

If this year goes anything like last, NORAD expects to receive more than 100,000 telephone and email queries on Santa’s whereabouts. If you’re wondering how much longer you have to lay out cookies for Santa (and carrots for reindeer), you can check in at 1-877-Hi-NORAD, shoot and email to noradtrackssanta@gmail.com, or follow along at noradsanta.org.