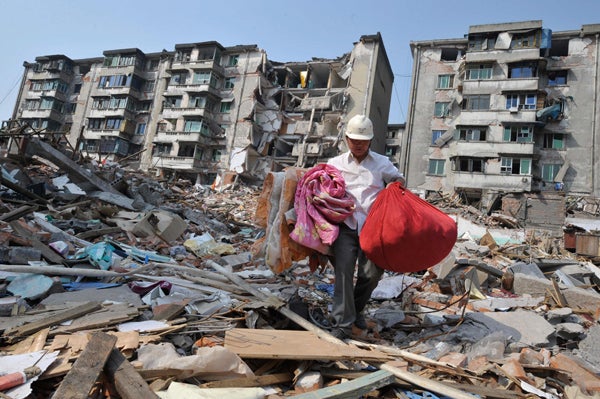 In earthquake-prone California, where geologists say that the “Big One” is virtually certain to strike before 2040, a few seconds of warning could save lives. Allowing more time to duck and cover is one of the major goals of the new Quake-Catcher Network (QCN), an affordable, citizen-based earthquake-detection system that turns idle laptop computers into seismic sensors.

Like other distributed-computing projects (such as SETI@home, which analyzes telescope data for signs of extraterrestrial life), QCN recruits volunteers to download software that harnesses the processing power of their computers and uses it to perform scientific tasks. But what’s different about QCN is that it wields sensors as well as software.
Those sensors are small accelerometer chips built into every Apple laptop manufactured since 2004, as well as into post-2003 IBM Thinkpads and some recent HP and Acer models. The main purpose of such a chip is to prevent you from destroying precious data; if you drop your computer, the accelerometer detects the sudden movement and puts the brakes on your spinning hard drive. But it can also be used to detect ground rumblings. 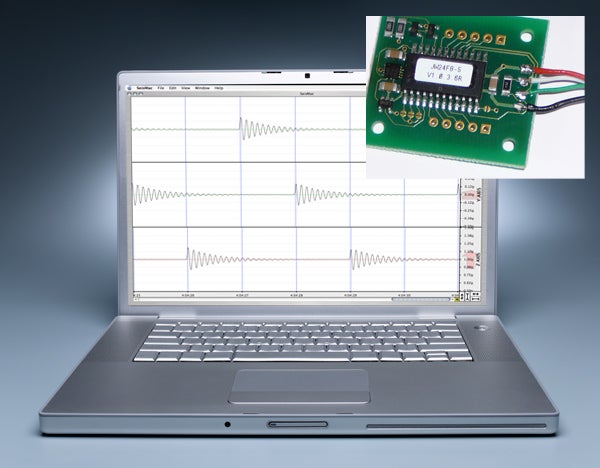 The computer accelerometers [inset] are installed into ordinary laptops and can detect early signs of seismic waves.

An application called SeisMac can already turn a MacBook into a seismograph by displaying accelerometer data in real time. QCN co-founder Elizabeth Cochran, a seismologist at the University of California at Riverside, had the idea of modifying the software to report movements to a central computer. With seismologist Jesse Lawrence of Stanford University, Cochran set about creating a network that could analyze data sent from thousands of computers at once. Each computer in the network springs into action only when it is connected to the Internet, and only after it has been idle for at least three minutes. “That’s so we don’t get vibrations from someone typing on their laptop,” Lawrence explains.

When active, the computer’s central processor samples the accelerometer 50 times per second, looking for any shaking that was not detected in the previous minute. If the computer detects a tremor, it sends a “trigger” message—containing information including the time and amplitude of the shaking—to a central computer. “It’s looking for large numbers of triggers coming in all at once,” Lawrence says. That’s the signature of an earthquake, and a cue for the computers to relay detailed data about the event.

Users can register their five favorite locations so that their laptops will know where they are when the shaking is detected. Even if the user isn’t at one of those locations, Lawrence says that in urban areas, “we can figure out where you are within about a mile” based on the IP address used to transmit the data. The network has already detected a magnitude-5.1 quake just west of Reno, Nevada. It’s especially suited to areas too vast or budget-strapped to deploy more sophisticated sensors, which often cover too little ground to get an accurate reading and tend to go off scale during heavy shaking.

While QCN can only detect a quake after it starts, that may still provide enough time to prepare for the stronger shaking that follows. Digital data travels faster than seismic waves, so even though it might take several seconds for the QCN headquarters to register the first wave, that would still allow enough time to slow down a train or close a gas valve before the secondary wave strikes. In fact, experts estimate that just a five-second warning can reduce the death toll of a major quake, such as the one that killed at least 69,000 people in China last May, by as much as 80 percent.

But first QCN creators must work out the thorny details of how to issue warnings without stepping on any official toes or causing mass panic. And they have to recruit foot soldiers. So far, only a few hundred people have volunteered for QCN. But the more computers that are part of the network, the faster it works. “To do early warning, we’d want at least 1,000 [volunteers] for the Bay Area,” Lawrence says. As it grows, the network might include iPhones and Wii remotes, which are also equipped with accelerometers. Ready to enlist? Visit qcn.ucr.edu.