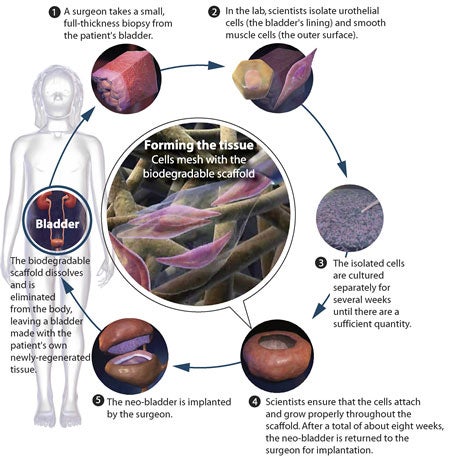 A company called Tengion announced recently that its full-size, neo-bladder replacements performed well in large animal models. Tengion’s technology – the commercialized version of the work of Anthony Atala – is based around the idea that it’s better to use the patient’s own cells to try to grow replacement organs and tissues, since transplants from donors often lead to rejection.

In this recent study, they grew substitute organs out of bladder cells taken from 23 animals, cultivated the cells in a biodegradable scaffold, and then implanted them back into the test subjects. Six months after the surgery, the regenerated bladders were the same size as the originals, and worked effectively, too. Next the company hopes to start clinical trials in 2009.

Check the videos of how it works here.