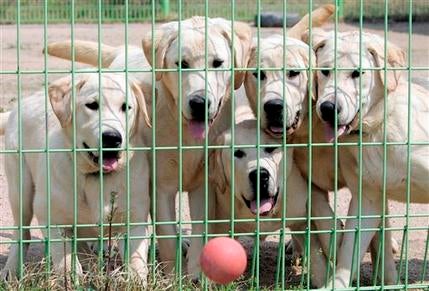 Five cloned dogs, all sharing the same name: "Toppy", a combination of the words "tomorrow" and "puppy", look at a ball during their exercise at Defector Dog Training Center in Incheon, west of Seoul, South Korea, Thursday, April 24, 2008. The country that created the world's first cloned canine plans to put duplicated dogs on patrol to sniff out drugs and explosives. (AP Photo/ Lee Jin-man). Lee Jin-man
SHARE

In 2005, South Korean scientists created the world’s first cloned dog, and now the country has announced plans to use clones to sniff for drugs. Yesterday the Korean Customs Service announced that seven Labrador retrievers had been cloned from an expert drug-sniffer that is still on the job. The scientists leading the research at one point worked with disgraced researcher Hwang Woo-suk, but the dog cloning work is legitimate.

The clones are being trained near Incheon International Airport, and all are reported to be healthy. And, strangely, they’ve all been given the same name: Toppy. Each one cost between $100,000 and $150,000 to clone, but that investment could pay off in the long run, if they become successful drug detectors. The dogs are now part of the way through a series of tests set up to establish whether or not they’re really fit for the job. Good genes aren’t always enough, after all.