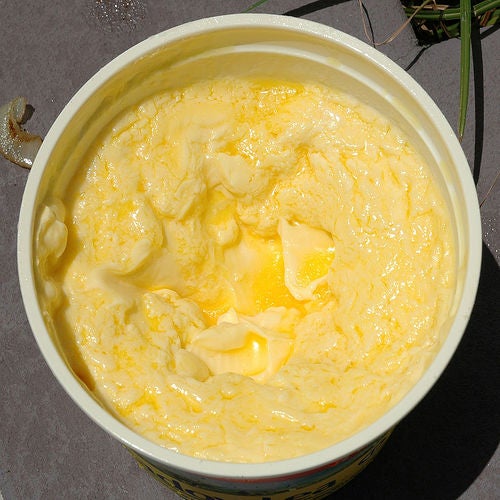 Last week scores of kitchen workers in New York met with researchers from the National Institute for Occupational Safety and Health to determine whether the fake butter sprays and spreads frequently utilized by the restaurant industry could be endangering workers’ respiratory health. A growing body of research has found diacetyl, a chemical compound frequently employed for its buttery taste, to be a potentially hazardous substance.

Diacetyl first gained attention when a handful of otherwise healthy workers in a microwave popcorn manufacturing plant contracted bronchiolitis obliterans—a rare and incurable lung disease. When scientists discovered diacetyl inhalation was the cause, “Popcorn Workers’ Lung” gained notoriety and unions began to call for greater government oversight. Most recently, the compound made headlines last year when one man’s unusual contraction of bronchiolitis obliterans was linked to a two-bag-a-day ten-year microwave popcorn habit.

So, given this chain of events, perhaps it is not surprising that last month Unite Here, a labor union representing food service employees, requested a health hazard evaluation for diacetyl exposure. The NIOSH team of physicians, industrial hygienists and epidemiologists was dispatched to select cafeterias and restaurants in New York to collect cooking spray samples, test ventilation systems and examine workers.

While results are still pending, Dr. Rachel Bailey, a NIOSH epidemic intelligence service officer, believes the findings will be useful. “These sites are good because so many of these workers have had long tenures there and a diverse amount of exposure.” Meanwhile, the Occupational Safety and Health Administration is in the midst of a program to determine, among other things, whether there should be standard permissible exposure level. Amongst the findings thus far: one in four rats died after six hours of exposure to diacetyl vapors.