Google and NASA build a search engine for the universe 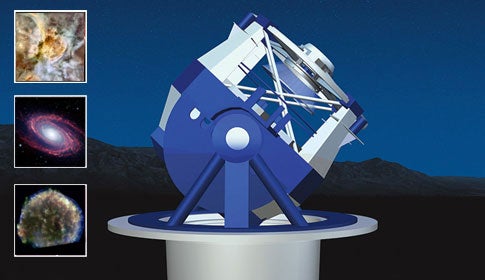 Night Watch The LSST will wield a 27.5-foot-wide mirror and a three-gigapixel camera to image cosmic marvels [left].

Within a decade, a dream team of astronomers and computer geeks vows to bring a world-class observatory to every desktop, giving anyone with a PC access to remote galaxies and exploding supernovae. The pledge is the result of a partnership announced last winter between a network of 19 national research institutions and engineers from the search-engine giant Google. Their collective objective is to develop potent software to process the estimated 30 terabytes of astronomy imagery (think 12 billion five-megapixel photos) that will stream nightly from the newly built Large Synoptic Survey Telescope, or LSST, slated to go online in 2013.

Set atop Cerro Pachn Mountain in Chile, the LSST will be the largest survey scope of its kind, sequentially imaging nearly 20 billion astronomical objects in the night sky twice a week at least 2,000 times over the scope’s 10-year lifetime. Google’s role in this $350-million project (beyond the modest $25,000 annual dues payment) is still largely undefined, but Rob Pike, Google’s principal engineer for the LSST, envisions a tool set akin to Google Earth, which combines a search tool with satellite imagery. So instead of killing time flying over your ideal vacation spot onscreen, you can opt for more productive surfing, such as scanning the skies for hazardous near-Earth asteroids.

One thousand times as powerful as previous telescopes, the LSST will survey the entire sky every three nights using a wide-angle mirror and a three-billion-pixel digital camera. As the telescope rotates on its base, the camera’s 15-second exposures take in an area 50 times as large as the full moon. Software will compile three-dimensional imagery to produce time-lapse digital “movies” of the universe.