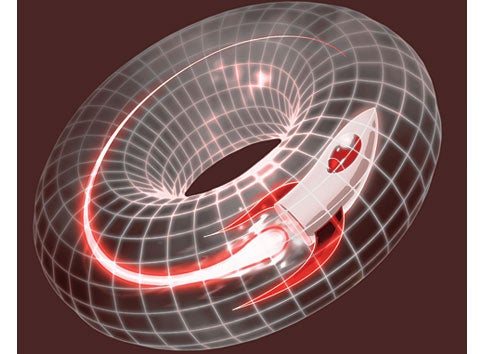 In July, theoretical physicist Amos Ori of Technion, the Israel Institute of Technology in Haifa, proposed a provocative new model for a time machine. Unlike previous designs, Ori’s version doesn’t require exotic wormholes-theoretical tunnels from one point and time in the universe to another. Instead it involves a force, either man-made or natural, to warp a region of spacetime so drastically that lines of time form closed loops. Pilot a spaceship around this course, and you’ll circle back to the past. We spoke with Ori about his work and about the prospect of visiting the dinosaurs.

AO: Right. It’s not such successful terminology. My “machine” is merely a certain configuration of gravitational fields.

PS: So what are you describing?

PS: And you think the answer is yes, that nature will permit it?

PS: Curving spacetime sounds difficult. Can we really do it?

AO: Presently we don’t have the technology to create significant gravitational fields.

PS: But could we develop this technology in the future?

AO: I believe that in the future there will be developments toward creating this. But maybe we will never have the techno-logy. To me that would be disappointing.

PS: Say we did manage to warp spacetime in the right way. You’d still need a vehicle to travel back in time, right?

AO: Obviously the practical way to navigate in this configu-ration is to have spacecraft equipped with a rocket.

PS: And then we could visit the past?

AO: You can go back in time, but only to times later than the moment of the construction of the time machine. So if we construct it now, in 2100 they will be able to visit us now, or later, but not earlier.

PS: No hope of visiting the dinosaurs, then?

AO: If the laws of nature allow the construction of a time machine, maybe it could have occurred naturally a billion years ago. Then people would be able to visit the dinosaurs.