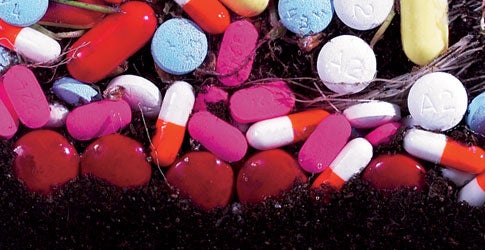 Don’t tell anyone, but Doug Ausenbaugh has built an underground drug farm–in bucolic southern Indiana, no less. It’s cleverly cached in an old limestone mine near the hamlet of Marengo. There, carefully cultivated stalks flourish under the glare of artificial lights and the rainlike spatter of drip irrigation.

The facility, run by Ausenbaugh’s biotech startup firm, Controlled Pharming Ventures, in cooperation with researchers from Purdue University, is intended for growing pharmaceutical crops–corn, tomatoes, tobacco and other plants whose DNA has been altered to produce a vaccine or medicinal compound. Drug companies have hailed this new field, known as biopharming, as a low-cost alternative to traditional manufacturing. But environmentalists, food-industry officials and other critics have decried pharma crops–which aren’t meant to be eaten and in some cases are toxic to humans–because of the danger of contaminating food supplies.

The fears aren’t based on mere conjecture. In 2000, evidence of a genetically modified corn intended only for animal consumption showed up in Taco Bell taco shells. Aventis CropScience, the corn’s grower, quickly abandoned the product and was forced to pay $2.4 million to people who said they had suffered allergic reactions to it. Two years later, federal officials fined the biotech company ProdiGene $3 million for allowing pharma corn carrying an experimental pig vaccine to contaminate soybeans in Iowa and Nebraska. Regulations have since been tightened, and the young industry suffered a huge blow when biotech behemoth Monsanto abandoned its biopharming research in 2003. Although several plant-produced biopharmaceuticals are still under clinical evaluation, none have reached the market yet.

Going underground, Ausenbaugh says, will resolve many of the sector’s problems. The 60-acre mine in Indiana provides a formidable barrier between the grow room and the rest of the world, easing the burden of containment in several ways. It makes pesticides unnecessary (the space is free of bugs), and it reduces the threat of vandalism (the entrance is policed by armed guards). What’s more, the constant 51