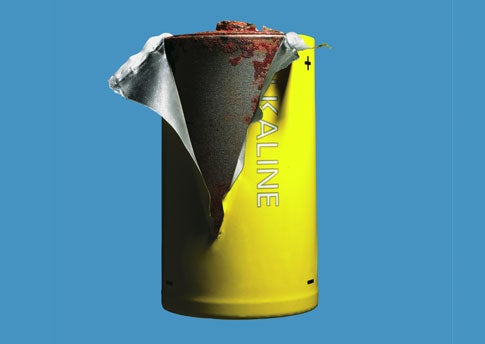 200 B.C.E. Parthians in present-day Baghdad make a crude battery, an iron rod surrounded by a copper cylinder inside a clay jar filled with vinegar.

1780 Italian physicist Luigi Galvani discovers that a frog will twitch as if shocked when brass hooks attached to its nerves are touched to an iron plate. He calls it “animal electricity.”

1896 The National Carbon Company in San Francisco produces the first battery for consumer use, a six-inch-long zinc-carbon cell used mainly in telephones.

1898 Size-D zinc-carbon batteries make their debut inside a paper tube along with a bulb and a brass reflector–the first “electric hand torch.”

1899 Swedish engineer Waldmar Jungner invents the nickel-cadmium battery (NiCd). It leaks. This flaw, along with its high cost, keeps it from being useful for another 50 years or so.

1956 Bowers Battery and Spark Plug Co. popularizes the idea that storing batteries in the icebox protects them from expiring prematurely.

1965 Proton-exchange-membrane fuel cells, introduced 10 years earlier by GE, power the Gemini 5 mission. Their questionable performance on this and subsequent Gemini spaceflights causes NASA to opt for alkaline fuel cells on the Apollo missions.

1967 Breakthrough research at Lawrence Berkeley National Laboratory on nonaqueous electrolytes makes possible batteries based on lithium, which reacts violently when exposed to moisture.

1990 NiMH batteries go on sale, taking on NiCds in the rechargeable market.

1995 Duracell premieres the Smart Battery
system for rechargeables. A microchip assesses the battery’s charge and condi-tion and communicates with the charger.

1996 President Clinton signs the Mercury-
Containing and Rechargeable Battery Management Act, which sets guidelines for the discontinuation of mercury cells.

1999 The prototypes of Urry’s alkaline battery are acquired by the Smithsonian National Museum of American History.

2002 Get your batteries out of the cold. Consumer Reports confirms that refrigerating alkaline batteries doesn’t do any good.