Chilling with Sound Waves, Not Freon

An eco-hip acoustic fridge debuts. But is anyone listening? 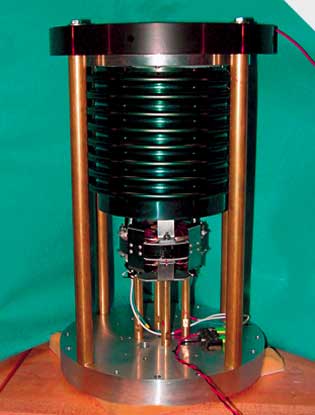 For the sake of the scoop, Ben & Jerry’s managed to do what no refrigerator manufacturer has: jolt into development the world’s most eco-friendly ice-cream freezer. Unveiled for Earth Day 2004 at a Manhattan scoop shop, the chiller relies not on greenhouse gases but on sound waves to keep the precious stuff cold. Research on thermoacoustic refrigeration limped along for 20 years or so until the ice cream duo forked over $600,000 to a Penn State team, which made the prototype in two years. The freezer is an ordinary deli cabinet piped to a 14-inch-high canister with soundproof stainless steel walls. A loudspeaker pumps sound waves (at 190 decibels, louder than a rocket launch) into the
canister, expanding and contracting helium gas inside. The pressure changes chill the icebox as efficiently as a conventional freezer. Cool? Sure. But even with investors now vying to make the technology commercially viable, the long-standing reign of cheap, functional ozone-polluting fridges won’t be trumped anytime soon. “Historically, environmental friendliness doesn’t sell,” says Penn State acoustician Matt Poese. But don’t tell that to Ben & Jerry’s. The company will test and promote the rig at its Vermont tour facility this summer.