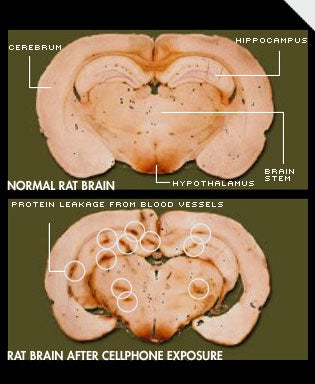 CAN YOU HEAR ME NOW?
Researchers at Sweden’s Lund University say these rat-brain cross-sections show first-ever evidence of brain damage from cellphone radiation. While the controls (example, top) appear healthy, the test subjects (bottom), which were exposed to a 2-hour dose of cellphone radiation of varying intensities, are heavily spotted with proteins (dark patches) leaked from surrounding blood vessels, and show signs of significant neuronal damage.

The safety of cellphones has been called into question, again. This time the scientific community is paying very close attention.

Last summer neurosurgeon Leif Salford and colleagues at Lund University
in Sweden published data showing for the first time an unambiguous link between microwave radiation emitted by GSM mobile phones (the most common type worldwide) and brain damage in rats. If Salford’s results are confirmed by follow-up studies in the works at research facilities worldwide, including one run by the U.S. Air Force, the data could have serious implications for the one billion?plus people glued to their cellphones.

The findings have
re-ignited a longstanding debate among scientists and cellphone manufacturers over cellphone safety.

Many of the hundreds of studies performed during the past decade suggest cellphone use may cause a host of adverse effects, including headaches and memory loss. Other studies, however, have shown no such effects, and no scientific consensus exists about the effect of long-term, low-level radiation on the brain and other organs. A comprehensive $12 million federal investigation of cellphone safety is currently under way but will take at least five years to complete.

Meanwhile, the research world is scrambling to replicate Salford’s surprising results. His team exposed 32 rats to 2 hours of microwave radiation from GSM cellphones. Researchers attached the phones to the sides of
the rats’ small cages using
coaxial cables–allowing
for intermittent direct exposure–and varied the intensity of radiation in each treatment group to reflect the range of exposures a human cellphone user might experience over the same time
period. Fifty days after the 2-hour exposure, the rat brains showed significant blood vessel leakage, as well as areas of shrunken, damaged neurons. The higher
the radiation exposure level, the more damage was apparent.
The controls, by contrast, showed little to no damage. If human brains are similarly affected,
Salford says, the damage could produce measurable, long-term mental deficits.

The cellphone industry so far has been quick to dismiss the data, saying emissions from current mobiles fall well within the range of radiation levels the FCC deems safe (body-tissue absorption rates of under 1.6 watts per kilogram). “Expert reviews of studies done over the past 30 years have found no reason to believe that there are any health hazards whatsoever,” says Mays Swicord, scientific director of Motorola’s Electromagnetic Energy Programs. Dr. Marvin Ziskin, chair of the Institute of Electrical and Electronics Engineers’ Committee on Man and Radiation, is similarly skeptical. “The levels of radiation they used seem way too low to be producing the kinds of effects they’re claiming.”

Salford is the first to admit that it’s too early to draw any conclusions, but contends the unusual results deserve a closer look. “The cellphone is a marvelous invention; it has probably saved thousands of lives,” he says. “But governments and suppliers should be supporting more autonomous research.” Meanwhile, Salford advises users to invest in hands-free headsets to reduce radiation exposure to the brain.