What the Dutch do for fun 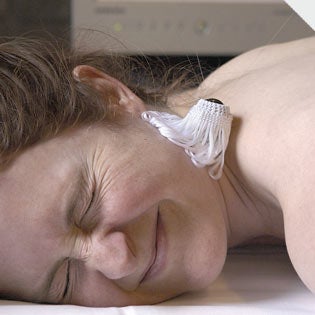 Our writer experiences firsthand the gentle attentions of the tickler.

Not enough giggles in your life? A team of Dutch artists might have the answer to your problem: A tickle machine. A machine made from a nylon-covered pinball operated via a computer-controlled suite of servos, motors and sensors whose entire raison d’tre is to tickle you — to tickle you steadily and relentlessly, with more single-minded tickle focus than even the most dedicated older brother. The machine is the creation of Erwin Driessens and Maria Verstappen, artist-inventors who really like to be tickled. The partners found that they were squabbling a little too often over whose turn it was to tickle whom. “All the time we say to each other, ‘No, you have to tickle me,’ and when the other one stops you feel like, ‘Oh, don’t stop, go on,'” says Verstappen. “You don’t want to ask another person to do something that he doesn’t like, that’s only for your pleasure, so that made us think of building a robot to tickle us.” Indeed, the robot tickler will never tire of tickling you. It will tickle you until you wet your pants.

It works like this: The pinball, draped with a soft nylon fringe, is suspended from the ceiling by four nearly invisible wires. The wires, which are constantly winding or unwinding, are connected to a stepper-motor; the motor tells a computer exactly how much the wires are wound or unwound and therefore where the pinball is in space. You, the ticklee, lie face down on a bed, and the pinball lowers itself until it collides (gently) with your back. When the wires lose tension, the computer plots a point on a 3-D graph. By lightly bumping against your body, the robot gradually learns your shape and makes a 3-D image on the monitor. As it learns, the pinball begins to hover an inch or two above you, letting the nylon fringe brush your skin. And — voila! — you’re tickled.

To experience the tickle machine for myself, I’ve come to the Eyebeam
art gallery, which hosts rotating technology-based art exhibitions in New York City’s Chelsea neighborhood. The tickler, which looks like a white nylon jellyfish gliding magically through space, has a simultaneously benign and sinister appearance, like the killer bunny in Monty Python and the Holy Grail. When activated, it rises straight up into the air and then makes a beeline for the bed. Lying there, I giggle just in anticipation and fight the urge to squirm. The jellyfish makes its first experimental bump against my back and then rears up, skittering slightly to the side to lower itself and bump again. Slowly learning the shape of my back and arms, it then travels north, tickling as it goes, and gets bogged down in my long hair. There it wanders around in confusion, trapped in a hair quagmire, until I roll away and off the
side of the bed.

And it does tickle. It feels like someone lightly brushing a feather over your skin, pleasant and soothing, though a little, well, robotic. All in all, it’s an interesting experience, but the Tickle Salon, as Driessens and Verstappen are calling the installation, is not something I’d want to set up in a corner of my living room. They’re not planning to market the tickler anyway, although they’ve considered it. “It was created for our own use,” says Verstappen. “And we are artists, not business people.” So what’s next for the duo? A robot to cook dinner? They glance at each other and laugh. “We fight about that too,” she says. “We take turns. So yeah, maybe.”