Ron Toms wants you to learn history and engineering. And if you want to pelt your siblings with dried peas, that's fine too. 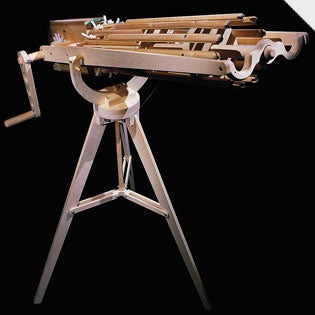 Toms’ latest offerings include what he calls “the only fully automatic machine gun that’s legal in all 50 states.” It shoots 144 rubber bands as fast as you can crank the handle.

Ron Toms is a catapult connoisseur. If you let him, he will regale you with the difference between the trebuchet (a crusade-era hurling device with a counterweight on one end) and the mangonel (basically, the catapult you usually see in the movies). He can teach you the history and design principles behind each one-or better yet, you can teach yourself by hopping onto any one of his Web sites (trebuchet.com, mangonel.com, and backyardartillery.com) and maybe even buying a catapult of your own.

Toms builds scale-model catapults in his small Sherman Oaks, California, factory. He makes a tabletop model that can hurl small wooden missiles more than 20 feet, and a 5-foot Warwolf trebuchet that’s one-tenth the size of the one used during King Edward’s medieval battles with the Scots. German engineering schools especially like his original floating-arm trebuchets. They use them to demonstrate the principle of efficiency. Toms has also sold a special catapult to a paraplegic who “needed a machine that could throw tennis balls for his dog.” The devices, Toms says, are both simple and endlessly profound. “A trebuchet, with a counterweight on one end and a slingshot on the other, is a double compound pendulum. Math professors sometimes use them to study chaos theory.”

Toms keeps things simple. He runs his empire out of his former laundry room and uses his garage as a warehouse. Most of his customers are students, which is just what Toms wants: young minds to inspire. “Newton developed the theory of gravity by watching an apple fall from a tree,” he likes to say. “Who knows what Newton would have come up with if he’d had a catapult!”