Are mysterious skin cells that never stop dividing a form of cancer, or the best hope yet for treating burn victims? 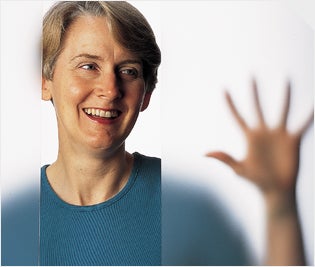 Lynn Allen-Hoffmann loves skin. When she talks about it, her voice softens until her Wisconsin accent is almost undetectable, and she whispers words like “elegant,” “brilliant,” and “masterpiece.” As a professor of pathology at the University of Wisconsin Medical School in Madison, Allen-Hoffmann has spent more than a decade studying the basic biology of skin cells: how they divide and how they become what she calls “our protective armor.” Normally, her harvested skin cells — like most other lab-grown cells — survive about 15 weeks.

When they die, she throws them out and starts again. But about six years ago, as her laboratory manager Sandy Schlosser started tossing out old petri dishes, she noticed what looked like a small colony of living cells in the midst of dead ones.

Schlosser held it to the light and said, “Hey Lynn, what the heck is this?” Allen-Hoffmann had no idea. “Oh gosh, maybe it’s a long-lived variant. Let’s just keep it and see what happens.” They did, and the skin cells never stopped growing. At the time, Allen-Hoffmann didn’t realize the cells’ potential, yet she kept studying them over the years. Today, they’ve become an important tool for testing cosmetics, a model for studying skin diseases — such as skin cancer — and their treatments, and analyzing the detrimental effects of chemicals on skin. But most exciting of all, they may turn out to be the best source yet of lab-grown skin to treat burn victims — better than any product presently on the market and one that will become shelf-ready to be shipped out on demand. Last year, Allen-Hoffmann founded Stratatech, a company that holds the exclusive license for the cells. The company plans to test the skin on burn patients within three years.

When you ask Allen-Hoffmann how she created the cells, she laughs a contagious whoop that trails off into a chuckle. “I have no idea,” she says. In fact, for a while, the cells were an in-house joke. Folks would nudge each other and say things like: “Gee, wonder if the cells are still alive.” After the cell population doubled for the 400th time and the lab’s freezer was bursting with the skin cells, people stopped joking.

While Allen-Hoffmann thought about growing her cells into swaths of skin, she didn’t realize how important her idea was until she got a call last year from Michael Schurr, a surgeon at the University of Wisconsin Hospital Burn Center, who insisted that growing skin become her top priority. The only lab-grown skin available to him was terrible, he told her: It took weeks to grow, and even then it was too thin to call skin.

Soon after their conversation, a local farmer literally melted into the side of a propane tank when a spark from his tractor ignited an enormous explosion. The only skin that remained on his body covered his feet in the shape of his shoes.

Schurr cut small samples from the farmer’s feet and shipped them off to a company called Genzyme, based in Cambridge, Massachusetts, where they spent weeks growing in culture as the farmer lay waiting in an anesthetic haze. Allen-Hoffmann didn’t know the first thing about clinical medicine, so Schurr invited her to watch the graft surgery. When she did, it was a revelation.

Allen-Hoffmann stood behind Schurr, her mouth gaping in disbelief as she watched him maneuver an instrument she likens to a “big rolling razor blade” to cut the burnt skin off the farmer’s body. “He looked like a butchered animal,” she says with a gasp. “Blood was rolling off the table. It was amazing.” Once the wound was cleaned and Schurr began applying the lab-grown skin replacement, she understood all too well how her cells might help. “You can hardly even see the skin,” which she says looks like plastic wrap and feels like wet toilet paper. “It’s very difficult to work with.

You can’t suture it, so the surgeons stapled it on. The patient had hundreds of little squares stapled all over his body.”

Skin is our largest organ, and it’s a multitasker: It retains fluids while protecting us from bacteria and other foreign objects, it insulates, and it facilitates hair growth and perspiration. It’s made of two layers: the epidermis, a thin outer layer that cloaks our bodies, and the dermis, a flexible inner layer that anchors the epidermis and makes it strong yet stretchy.

To cover large burns, surgeons usually do what’s called a split-thickness skin graft: They split whatever healthy skin is available in half, leaving much of the dermis at its original site and transplanting the epidermis with some dermis onto the burned area. Both sites, which after surgery resemble the worst kind of rash, will heal with time. But these grafts come with many problems: As the patient heals, split-thickness skin contracts, which means extensive follow-up surgeries and reconstruction down the road. Unfortunately, in most serious burn cases — like Schurr’s farmer — there’s usually not enough skin left to split. In these cases, surgeons turn to lab-grown skin replacements, but these too are woefully inadequate.

While enough of the skin Schurr grafted onto the farmer, a product called Epicel, can be grown to cover a whole person in two weeks, it consists only of an epidermis. Scientists know all the ingredients that go into a dermis, but the structure has them stumped. Like spider’s silk, the dermis is an intricately woven material with a three-dimensional structure so complex that it hasn’t yet been replicated perfectly in the lab. So Epicel must be glued to an artificial dermis that acts as a scaffold upon which a patient’s body can slowly build a new dermis.

But artificial dermises aren’t perfect: They’re complicated to use, which can limit their success, and they can be a hotbed for infection. But most important, the final skin graft is only about four to eight cell layers thick; normal skin is more than 30 layers. And it’s so fragile that sitting in a chair after surgery can tear the skin patches.

For now, Epicel is the best option for a burn victim who needs lab-grown skin. Immune rejection hasn’t been an issue, because most patients’ immune systems aren’t extremely sensitive to collagen — the main component of the artificial dermis that is often used in plastic surgery to smooth wrinkled faces or help plump up skinny lips.

Another artificial skin product, manufactured by Basel, Switzerland-based Novartis, called Apligraf, is the closest thing yet to an off-the-shelf product, and as such doesn’t require a waiting period. It consists of human skin cells and a dermis made from cow collagen. But right now, it’s only approved for use in foot and leg ulcers, although the company hopes to develop it for burn treatment soon. Unlike Epicel, which uses skin samples from each patient to grow an epidermis, Apligraf uses cells from the foreskins of circumcised babies. Though skin transplants from donors are usually rejected, according to the company, Apligraf doesn’t have a problem with rejection.

This, it says, can be explained by normal neonatal development: Oftentimes, newborns’ cells lack the components that stimulate an immune reaction, so they won’t be rejected by the mother while developing in the womb.

What sets Allen-Hoffmann’s skin apart from others is that it would be the only one that is just as thick as normal skin. The epidermis would be made of her lab-grown cells, but because of patenting issues the dermis is still a secret. Yet there is a hitch: Since her cells never stop growing, they’re called immortal. And there is only one cell type in which immortality is considered normal: cancer.

Though there are several reasons why cells become immortal, including chromosomal abnormalities, one feature common to all of them is that they’ve violated something called the Hayflick limit. In the early 1960s, Leonard Hayflick, now a cell biologist at the University of California at San Francisco, discovered that normal cells have a limit to how many times they can divide. After about 50 divisions, they enter a state called senescence — where the cells are alive but not actively dividing. They stay in this state until they die a natural death. But occasionally, some cells divide beyond their Hayflick limit and never stop. And according to Hayflick, these cells are almost always cancerous.

“By definition, an immortal cell population is abnormal,” Hayflick says. “How could you take a cell that is abnormal and transplant it onto a human and have it mysteriously and miraculously act like a normal cell?”

Allen-Hoffmann’s cells do divide indefinitely in the lab, but — interestingly — in an environment that mimics the human body, they behave like normal skin cells. “We are studying skin grafts for the entire length of the experimental animal’s life,” she says in her defense, “and we have yet to see any tumors or other characteristics associated with malignancy, such as the cells not obeying tissue boundaries.” And actually, those facts completely surprised her: She expected the cells would be cancerous too.

Beyond the question of cancer, the other big issue is whether patients transplanted with skin made from someone else’s cells will reject the tissue as foreign. Like Apligraf’s, Allen-Hoffmann’s cells come from the foreskins of circumcised babies. So far, she hasn’t seen signs of rejection either. Though she isn’t done investigating this phenomenon, some experts speculate that it may be explained by the same neonatal characteristics that keep skin-graft patients from rejecting Apligraf.

Could the unknown factors and the cells’ cancerous potential keep Allen-Hoffmann’s skin from hitting the market? According to the FDA, immortality and chromosomal abnormalities don’t rule out approval: “We’re concerned with whether it’s safe and effective, so that’s what trials of any new product must show. Obviously researchers think this is doable with immortal cells, or they wouldn’t be trying.”

After many months in the hospital, Schurr’s farmer went home. But Allen-Hoffmann doubts he’ll be working the fields anymore. “He survived,” she says softly, “but with very limited function.” She looks forward to testing the skin in human trials. And she does not take safety lightly. “These questions about risks are very important, I’m not going to diminish that,” she adds. “But I think there’s real potential for these cells to help people.”