How to play chess ... Martian style. 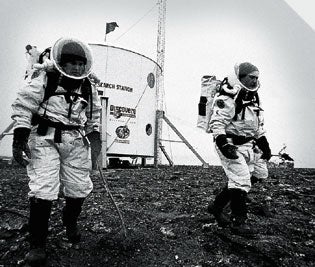 What’s life on Mars without “Martian Chess?” The president of the Mars Society explains.

Martian Chess is played on an ordinary chessboard using a standard set of chess pieces, a standard deck of 52 playing cards, and a six-sided die. The pieces are set up in the usual fashion, and each player is dealt 13 cards. White goes first.

In his or her turn, a player roles the die. The number shown on the die is the number of “moves” a player can make. Each move allows a player to move a piece (pieces move in the same fashion as in standard chess), but no piece may be moved twice in the same turn. Rather than move a piece, a player may use a move to discard a card from his hand, placing it face up on the discard pile so it may be seen by his opponent, and drawing a new card from the deck. A player may also use a move to exchange one piece he has captured for an identical one captured by his opponent, placing the returned piece of his own color into his “reserve.” A move may also be used to place (paradrop) a piece from a player’s reserve on any vacant square, except that pawns may not be placed on the first or last rank.

Capture: When a player moves one of his pieces onto a square occupied by an opposing piece, he (the attacker) plays a card. The opponent (defender) must then play a card of the same suit if he has one. If he does not, he may play any card. The attacking player then plays an additional card, which must be of the same suit as his initial card if he has one. The defender then plays a card, which must be of the initial suit if he has one. The highest card played (Aces are high, followed by K,Q,J,10,9,â€2, as in Bridge) of the initial suit led wins the battle. The winner keeps his piece on the contested square and takes prisoner the losing piece. The cards played go into the discard pile, and each player then draws two more cards from the deck to replace those used in the battle. When the deck is used up, the discard pile is shuffled and used to replace the deck.

If an attack on a defending piece fails (that is, the defender wins the card play), the attacker may, if he has moves left and pieces in position, send another piece to attack the defender again in the same turn. The second attack need not follow the same suit as the first.

Object: the object of the game is to capture the opponent’s King.