Scientists Can Trick You Into Thinking You’re Invisible

The illusion could one day help people conquer their fears 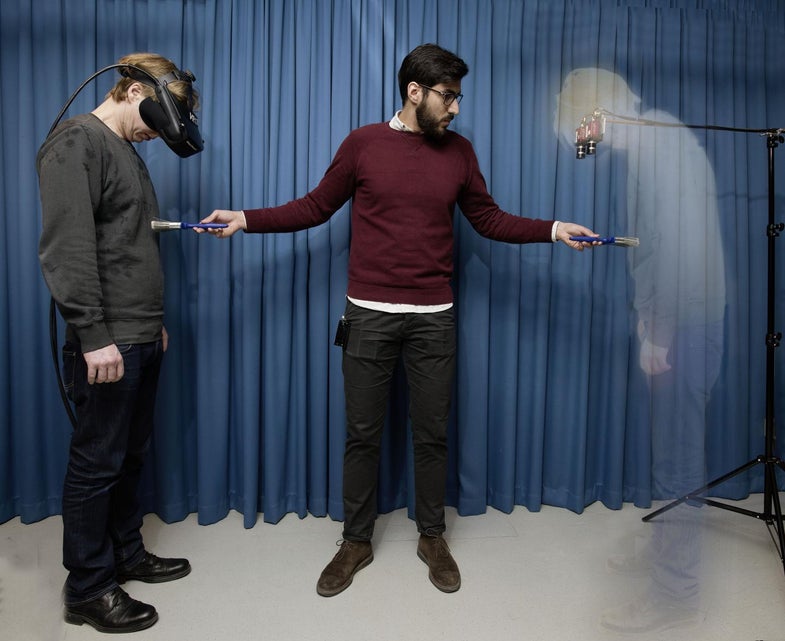 It looks like Muggles have finally caught up with the wizarding world. Neuroscientists from Sweden’s Karolinska Institutet gave 125 study participants the illusion of being invisible.

The researchers described the invisibility illusion in the journal Scientific Reports. For the experiment, a participant stands and wears a head-mounted display, which plays a real-time video feed from a camera pointed down at an empty space nearby. So when the participant looks down, she sees an empty space instead of her body. The scientist touches various locations on the participant’s body with a large paintbrush. At the same time, with a paintbrush in his opposite hand, he imitates these motions in mid-air beneath the camera. The participant simultaneously feels the brush poke and sees the brush poking into empty space. The trick leads to a Harry Potter-like sensation of invisibility. Off to Hagrid’s!

Arvid Guterstam, the lead author of the study, explains in a press release, “Within less than a minute, the majority of the participants started to transfer the sensation of touch to the portion of empty space where they saw the paintbrush move and experienced an invisible body in that position.”

To test how well the illusion worked, the researchers made stabbing motions with a knife toward the empty space that represented the invisible body. When participants were under the spell of the illusion, they perceived these jabs as threats to their invisible bodies, and their sweat and heart rates were elevated. But when the illusion was broken–for instance, when the brushstrokes they felt and those they saw weren’t in sync–they weren’t unnerved by the knife.

Interestingly, the illusion of being invisible changed participants’ responses during stressful situations. The researchers positioned the participants in front of a virtual audience of strangers, measuring their heart rate and self-reported stress levels. Unsurprisingly, participants were less stressed when they thought they were invisible.

So basically, pretending you’re invisible seems to be a more effective way to handle stage fright than imagining everyone in their underwear.

Looking ahead, the researchers hope to find out what else an illusion of invisibility might affect. This study might be useful for social anxiety disorder therapies or to examine decision-making. The study’s principal investigator Henrik Ehrsson says, “Follow-up studies should also investigate whether the feeling of invisibility affects moral decision-making, to ensure that future invisibility cloaking does not make us lose our sense of right and wrong, which Plato asserted over two millennia ago.”