Drones revealed the intricate social lives of these killer whales

Studying social relationships among animals is important to fully understanding them. 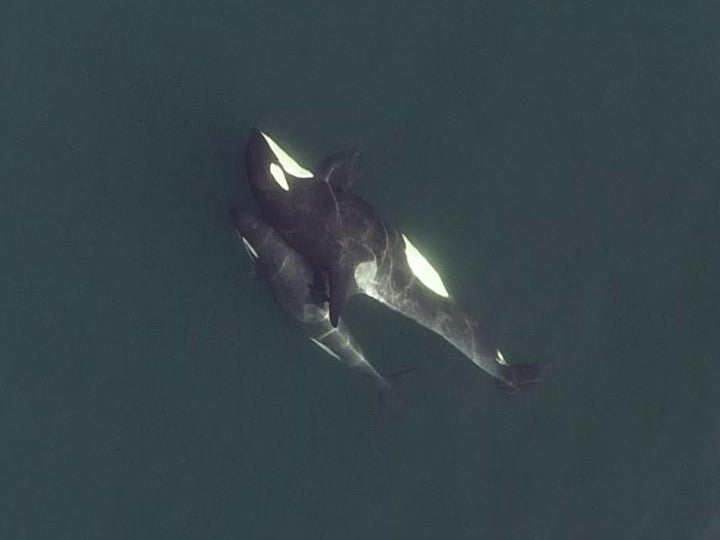 The drone footage also allowed the researchers to measure actual interactions, such as physical touch, between the whales.
SHARE

Social relationships are crucial for so many animals, from humans—for whom loneliness has been recently deemed an “epidemic”—to wasps to so-called “Resident” orcas: killer whales in the coastal North Pacific who eat fish and live in matrilineal groups. A new study published in the journal Proceedings of the Royal Society B used drone footage to take a closer look at the social dynamics in a pod of Southern Resident orcas in the Pacific Northwest.

“We know that these whales are extremely social,” says lead author Michael Weiss, a postdoctoral research fellow at the University of Exeter, and previous studies have shown that social relationships seem to be important for their survival. Being able to measure these relationships in fine detail—understanding who is closely tied to whom, for example—could be critical for understanding how this population will fare in the future, he says. Southern Resident orcas are currently endangered, and their preferred food source, the Chinook salmon, is declining in population. The orcas have been suffering from starvation, ocean noise, and pollution.

During the summer of 2019, the authors launched a small drone over subgroups of a Southern Resident pod called “J,” which is made up of 22 orcas. They filmed continuously for 15 to 30 minutes at a time. Later, going back through the videos, the researchers identified how often two individuals were in the same group together. The drone footage also allowed the researchers to measure actual interactions between the whales—ones like physical contact and surfacing to breathe in unison, two behaviors that can indicate a social connection. (For example, for a lot of animals, says Weiss, touch is used to reinforce relationships, or to make up after a fight.)

“The main question we had is, who’s actually interacting with each other in these groups—not just, who are they in a group with?” says Weiss. By looking at these up-close interplays, the researchers hoped they might learn new information about what drives these interactions, like whether orcas of the same age interact more often than those of varying ages and what role gender plays in these relationships.

Underlying the study is a methodological question around how to best measure social relationships in animals, Weiss says. Even deeper: “How do we gain an understanding of animal societies?”

The researchers found, in line with previous studies, that the main factor driving the probability that two individuals would be in the same group together was how closely related the mammals were to each other. But there were other factors that contributed to whether the animals would actually interact (physical touch or breathing together). They found that individuals were spending more time interacting with others of the same sex and of similar age, with younger orcas and female orcas displaying the most robust social lives.

A key factor to this study’s success was the technology the researchers used. Drones offer up “a whole new world of possibilities,” wrote Filipa Samarra, a researcher at the University of Iceland and founder of the Icelandic Orca Project, a research and conservation organization, in an email to Popular Science.

“This is a really interesting study that shows the inner workings of the social lives of killer whales in a level of detail that we don’t usually have access to,” wrote Samarra, who was not involved in the research.

The fact that traditional methodologies might not fully capture the full complexity of social relationships in a group, Samarra continued, suggests that “even after years of studying these whales, there is still so much to learn.”