How Nicolas Fontaine Is Saving The Internet From Itself

Fontaine, an optical engineer at Bell Labs, Alcatel-Lucent, has devised a clever way to avoid a data bottleneck. 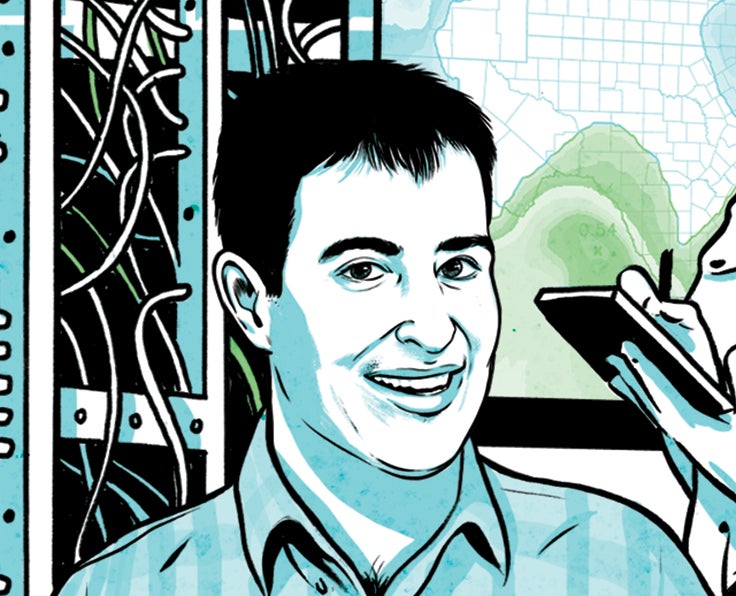 Saving the Internet from itself

Nearly all communications data—Web, phone, television—runs through a network of fiber-optic cables. For now, that’s fine. But within a decade, data traffic is expected to outgrow infrastructure, which will result in transmissions that are slow and garbled. Nicolas Fontaine, an optical engineer at Bell Labs Alcatel-Lucent, has devised a clever way to avoid a data bottleneck.

Fontaine and his colleagues invented a new kind of multiplexer, a device that bundles multiple inputs into one stream in order to cram a lot more data into a single optical fiber. It works by routing different light beams, called modes, along carefully planned pathways; the beams of information travel together but don’t interfere with one another. “The old fiber would be only a single-lane highway,” says Fontaine. “Now we can add multiple lanes.” Fontaine’s multiplexer avoids the signal loss that crippled earlier devices; he has already shown that his multiplexer can send six light streams down 497 miles of fiber without losing data along the way.

While previous multiplexers are a cubic foot or more; Fontaine’s is 50 cubic millimeters. Since it’s made of glass and etched by laser, it would be cheap to produce. The device is also scalable: “Right now, we’re working on a 10-mode device—an order of magnitude over existent single-mode fiber,” Fontaine says. “We want to figure out how far we can go.”