When Do We Break Up Someone Else’s Drunken Fight?

A new study examines when people decide not to mind their own business. 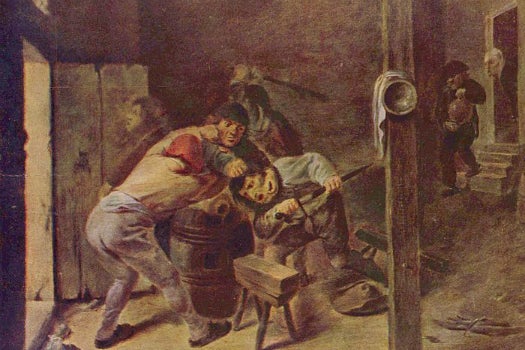 When does alcohol-fueled conflict merit intervention? Not as often as you might think, according to a recent study of third-party involvement in bar fights–only about a third of the time does a good Samaritan (or someone spoiling for a fight of their own) jump into the fray.

In an effort to examine what situations prompt uninvolved bystanders to step in during bar fights, a team of researchers led by Penn State sociologists examined 860 aggressive incidents in large Toronto bars over the course of 503 nights.

Trained observers were sent into bars in pairs, an average of 25.5 nights per person, to be on the lookout for any acts of physical aggression, unwanted physical contact or verbal insults. Any sort of conflict or dispute that made the participants angry or they took personally was recorded. (The observers got to order one drink per night so as not to be noticed as those creepy dudes taking notes at the bar.)

They found that one-third of barroom brawls garnered the attention and participation of a bystander, usually in a non-aggressive manner. Most (80 percent) of those that jumped in were male, and they were more likely to step in when both participants in the fight were also male.

And the more drunken and more aggressive a dispute got, the more likely bystanders were to intervene: 72 percent of mutually aggressive, male-on-male fighting led to someone stepping in. The researchers hypothesize that two drunk men getting physical might be a “danger signal” that portends serious violence.

“The present results are generally consistent with evidence that aggression in bars is largely a male phenomenon, with bars being settings with heightened concerns regarding male honor and identity,” they write.

Despite notions of chivalry, in real life, it seems, no one’s looking to save the damsel in distress. Though the most frequently observed type of aggressive conflict occurred between a male aggressor and a female victim, third parties were least likely to intervene there (only 17 percent of those type of conflicts merited intervention). Because those types of conflict, generally involving unwanted sexual attention coming from the male end, rarely escalated into physical fighting, the researchers theorize that bystanders view them as non-dangerous conflicts.

Unfortunately, the observers were unable to gather data on the motives of those who intervened–like whether they were strangers or friends of the fight’s participants–so we can’t know for sure why people step in when they do.

The study is published in the July-August issue of Aggressive Behavior.