Animated: How The West Coast Will Look Under 25 Feet Of Water

San Francisco, get ready to get your feet wet. 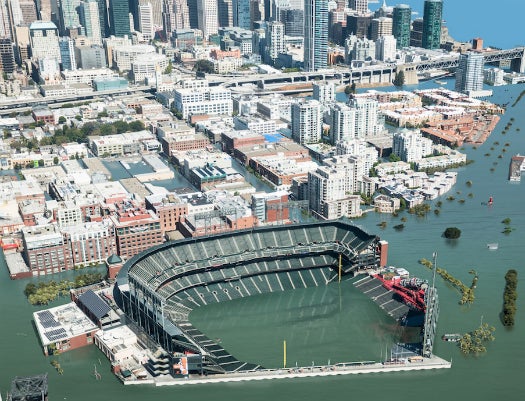 Back in April, artist Nickolay Lamm put together a collection of illustrations of what some of the East Coast’s popular tourist destinations would look like under 25 feet of water, the potential sea level rise expected in the next few centuries. Since then, he’s added a few new destinations along the West Coast in California.

Lamm, who used sea level rise data and maps from Climate Central, first posted the images on the blog for StorageFront.com, a search engine for self storage. We went ahead and put them into GIF form to really show the difference in water levels. The basic moral: Head for the hills, California beach bunnies.

Across the city, Chrissy Field, a former army airfield that’s now part of Golden Gate National Parks Conservancy, will be conserved under a lot of ocean:

The San Diego Convention Center might be able to stay in business if it becomes the future home of scuba diving conventions, perhaps:

The view from San Diego’s Coronado Island will disappear completely, though:

“I was encouraged by people who looked at the first project and noted that the images made them look at their hometowns in a totally new way,” Lamm wrote in an email. Being able to ditch LA traffic for a kayak seems sort of pleasant, though.