New papers describe an unexpected boundary region at the edge of the influence of the Sun. 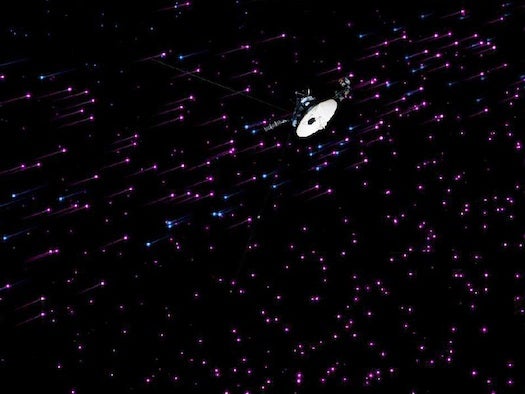 A few different effects mark the area, which astronomers have dubbed the “heliosheath depletion region” or a “magnetic highway.” The number of charged particles from the Sun there is very low. Measurements of cosmic rays from other, non-Sun sources, are high. Together, the measurements suggest a new boundary region between the heliosphere—the bubble around the Sun, in which the Sun exerts its influence—and interstellar space. Astronomers had not previously guessed such a region existed. 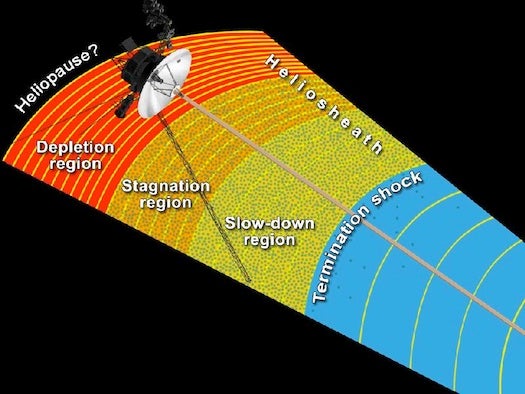 Regions Away from the Sun

An illustration of regions at the edge of the heliosphere through which Voyager 1 has journeyed. The heliopause is the border between the heliosphere and intersteller space. Scientists don’t know exactly where that is, so it’s shown with a question mark.

There’s been plenty of talk about the Voyager 1’s travels lately. Astronomers have been picking up these measurements over the past year. PopularScience.com posted about an increase in cosmic rays last June and this past March.

Everyone is excited for the Voyagers, which are the farthest human-made objects in space, to leave the heliosphere and enter interstellar space. That hasn’t happened yet. Still, astronomers have picked up two of the three signs they expected to see when Voyager 1 exists the heliosphere, NASA reported. Scientists aren’t sure exactly how large the heliosphere is, so they don’t know when Voyager 1 will exit. It may be months or years.

The Voyager 1 and 2 spacecraft blasted off from Earth in 1977. They bore, among their instruments, golden records with images and sounds including silhouettes of a man and a woman, images of human architecture, greetings in 55 languages, 90 minutes of music and other images and audio from Earth. Voyager 1 is now more than 11 billion miles away from home, while the Voyager 2 is about 9 billion miles away from Earth. Voyager 2 hasn’t yet encountered the weird boundary region Voyager 1 has.