Whoops: Moon Dust From Apollo 11 Lost In Storage For Years

The dust was rediscovered last month in a UC Berkeley warehouse. 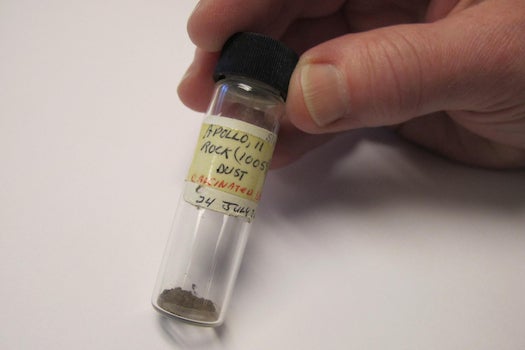 You’d think moon dust would be something people would keep an eye on since, you know, you have to go to the freaking moon to get it. But somehow, samples retrieved from the 1969 Apollo 11 mission got lost–probably for years–in a University of California, Berkeley, archive until they were found again last month.

Archivist Karen Nelson found 20 vials of the stuff, labeled “24 July 1970,” while clearing out a Berkeley warehouse last month. (Hard not to imagine the warehouse that shows up at the end of Raiders of the Lost Ark.) Along with the samples was a 1971 paper that examined the samples for carbon. It’s not clear exactly how long they were stuck in storage, but the samples–sent to 150 U.S. labs after the moon mission–should’ve been returned to NASA after testing.

Nelson, in a media release, said she contacted Berkeley’s Space Sciences Laboratory: “They were surprised we had the samples,” she said. Which, yeah, you’d assume they would be. Afterward, Nelson got in touch with NASA, which allowed her to open the vacuum-sealed container the vials were in but requested the moon dust back.

Apparently you can’t just shout “Finders, keepers!” when you come across this kind of thing.