A new theory suggests humans became bipedal so that we could scramble up rugged terrain. 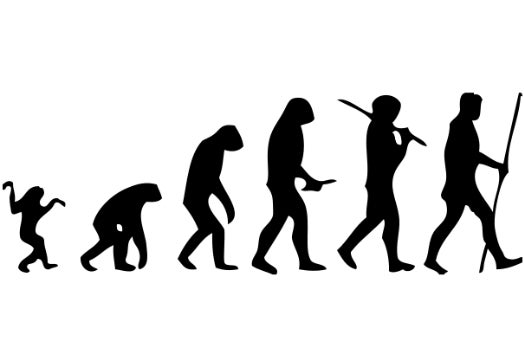 The story of how humans evolved from knuckle-walking primates to upright bipeds is still a matter of great debate among anthropologists. One of today’s leading theories suggests that our forest-dwelling ancestors began walking on two feet as climate change stripped away the trees they lived in, forcing them to move to the ground. Another explanation for our bipedal evolution is that walking on two feet helped us carry babies, though that theory has been debunked.

In a paper published in the latest issue of the journal Antiquity, researchers from the University of York and the Parisian Institut de Physique du Globe present yet another theory: that bipedalism evolved as a response to complex topography–places with active tectonics and rough, rocky terrain–in eastern and southern Africa during the Pliocene Epoch up to 5 million years ago.

The presence of hominins, our early human ancestors, has been linked to regions with active tectonic and volcanic regions in Africa.

Somewhere along the way, hominins developed big toes and foot arches, both structures that help us stride and run upright, but could’ve also helped us climb up rocky terrain. The development of shorter arms and dexterous hands would also have assisted in the climbing process. In turn, that dexterity would have facilitated tool use. 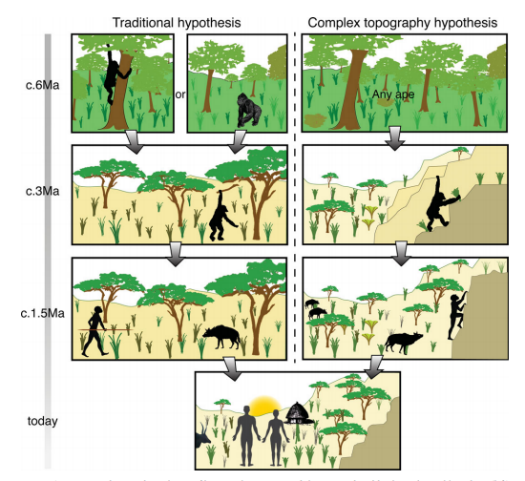 The traditional theory of bipedal evolution (that we moved out of the trees and learned to walk upright) versus the theory that we adapted to scramble over more complex terrain.

“The broken, disrupted terrain offered benefits for hominins in terms of security and food, but it also proved a motivation to improve their locomotor skills by climbing, balancing, scrambling and moving swiftly over broken ground – types of movement encouraging a more upright gait,” lead author Isabelle Winder explained in a press statement. Rocky terrain would have provided more protection than forests, since many large African carnivores can’t climb.

The researchers call for further study of ancient landscapes to support this theory, though ancient conditions in active tectonic regions like the East African Rift can be difficult to reconstruct because they have changed so much over time.