Wearing A Kilt Could Make Your Sperm Stronger

Temperature regulation is the key to fertility. 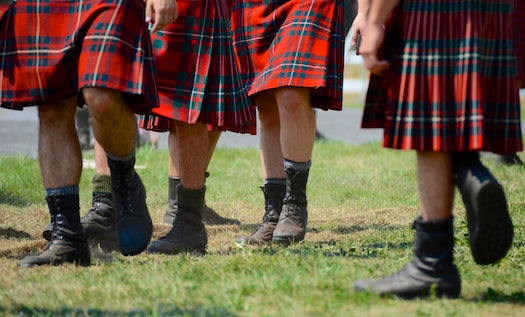 Temperature affects how much sperm a man makes, so there’s been speculation that the freedom offered by a kilt can increase production. Turns out that that at least could be right: a new metastudy says wearing a kilt “likely produces an ideal physiological scrotal environment, which in turn helps maintain normal scrotal temperature, which is known to be beneficial for robust spermatogenesis and good sperm quality.”

The study (PDF), published in the Scottish Medical Journal, reviewed the literature on the link between scrotal temperature and reproduction. We know sperm fares better in lower temperatures, and some researchers have suggested that restrictive clothing could negatively affect sperm production. Enter: the kilt, which author Erwin J.O. Kompanje describes thusly: “The Scottish kilt is a male garment that resembles (but is not!) a knee-length, pleated skirt.”

The author hypothesizes that, based on past findings about temperature and sperm production, a kilt, specifically one worn in the undergarment-free “regimental” style, would be an ideal environment for sperm production. Kompanje searched through related research, focusing on statistics in Scotland and noting along the way that 70 percent of kilt-wearers choose to go regimental. Kilts (at least in Scotland or other countries where they’re more commonly worn) might also be psychologically valuable, increasing feelings of masculinity when worn. Kompanje goes so far as to write that a downturn in Scottish fertility is correlated with the frequency of kilts being worn, although he admits it’s still somewhat speculative until a randomized trial happens. Gentlemen, put on your kilts for science.