How Marathons Have Been Attacked [Infographic]

The Global Terrorism Database shows where other attacks and attempted attacks on marathons have happened. 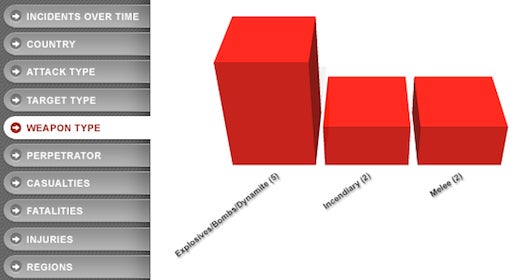 An attack on the Boston Marathon has left at least two dead, according to reports. The Global Terrorism Database catalogues events like this, and has a record of eight other attacks or attempted attacks on or involving marathons. But out of those, only one was lethal. 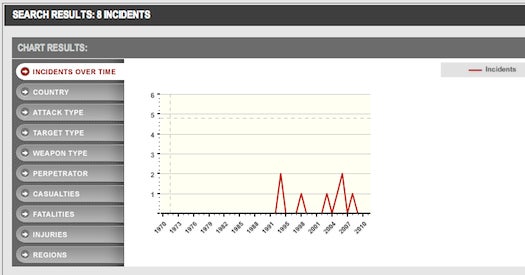 An attack in Sri Lanka from a suicide bomber killed 14 civilians and the minister of highway and road development as he was signaling the start of a road marathon. 83 people were also injured. Of the other marathon attacks noted by the GTD (three in Northern Ireland and two in Pakistan), only two attacks resulted in any injuries. One in Pakistan caused four, and one in Bahrain caused three.

Full details aren’t available on the attacks, but the majority of them were orchestrated bombings, happening from 1994 to the Sri Lanka attack in 2008. The targets were most often police, but two of the attacks, like the Boston Marathon bombing appears to be, were an attempt to harm private citizens.