I, for one, welcome our new unicellular overlords. 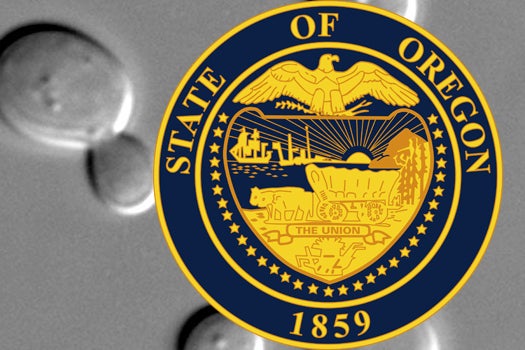 Oregon lawmakers in the House just voted 58-0 to approve its new state microbe. If the state Senate also approves, Oregon will boast Saccharomyces cerevisiae, the humble ale yeast, as its unicellular avatar. It makes sense: according to Mark Johnson, the bill’s sponsor, the craft brewing business brings Oregon some $2.4 billion in revenues each year.

Contrary to reports you’ll read elsewhere, Oregon is not the first state attempt to have its own microbe. That honor goes to Wisconsin. In 2010, lawmakers in the state Assembly tried to elevate Lactococcus lactis, the bacteria used to make buttermilk and cheese, to official state microbe. But the apparently narrow-minded or scientifically incompetent Wisconsin state Senate did not embrace the measure, and so the L. lactis bill languished. Recalcitrant politicians are why Wisconsinites can’t have nice things, but let’s hope that the Oregonian variety is a bit more enterprising. (It should be noted that Hawaiian lawmakers have also proposed two different, rare microbes to represent Hawaii, but neither have been made official, either.)

While researching this story, I found an interesting letter to Microbe magazine from two microbiologists at Rutgers, The State University of New Jersey, on the topic. The authors mused that while Wisconsin (and now Oregon) have positive microbes associated with them, efforts by microbiologists to give other states their own microbes are up against some unsavory characters.

If one were to choose a microbe historically associated with a state (due to it being discovered there or to its prevalence in the region) Montana would likely end up with Rocky Mountain Spotted Fever (Rickettsia rickettsii), Louisiana would get Hansen’s Disease, aka leprosy, (Mycobacterium leprae), Connecticut would inherit Lyme disease (Borrelia burgdorferi) and Nevada would merit gonorrhea (Neisseria gonorrhoeae). In 2010, another wag suggested certain cities should get their own microbe, and nominated Clostridium botulinum, the unicellular producer of face-freezing Botox, for Los Angeles.