Hewlett Packard has spent the past 25 years in the printing business, enabling legions of businesses to print documents and... 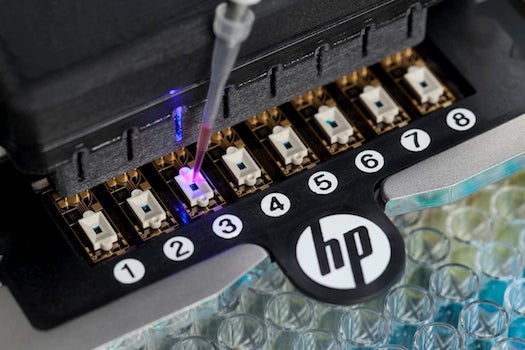 Hewlett Packard has spent the past 25 years in the printing business, enabling legions of businesses to print documents and photos. But that hasn’t been the company’s only endeavor.

Over the past 10 years, HP’s research and development teams have been working on ways to transfer standard inkjet technology for use in pharmaceutical labs. The result: HP’s Direct Digital Dispenser (HP D300), a printer-like system that helps scientists develop new drugs. Scientists at pharmaceutical companies such as Astra Zeneca, GlaxoSmithKline and SIGA Technologies are using the D300 to develop new drugs. SIGA has already put the D300 into practice to develop an experimental compound dubbed ST-246, which would be given to people who are diagnosed with smallpox too late for a vaccine to help.

How did HP take technology from the copy room to the biochemical lab?

***
It started about five years ago, when HP realized that the precision technology used in its Officejet Pro X printhead might have applications in the life sciences space. The Officejet Pro X has a sophisticated printhead that’s able to spew out tiny drops of ink for ultra high-resolution printing. According to Joe Dody, business manager of specialty printing systems, HP’s first printer, the “Thinkjet,” had 12 nozzles with drop volumes of 220 picoliters each. (One picoliter is one-trillionth of a liter. For scale, think: an average raindrop contains several hundred thousand picoliters.) Photo-quality printing demands drops of less than 10 picoliters. The Officejet Pro X has a sophisticated page-wide print bar that features a fixed inkjet printhead, which images the full width of the paper path in one operation and contains 42,240 nozzles jetting drops of 6 picoliters each, one at a time through individual nozzles. “We spent a lot of money and time getting the drops that small,” Dody says.

At first, Dody’s team considered adapting the technology for drug delivery and drug discovery systems, but eventually settled on just the latter, because they wanted to be on the front end of the pharmaceutical process. “We imagined the application and we worked with customers to convince ourselves and the industry that we were creating value in doing it,” he says, “So we gained support from HP to make a business out of it.”

***
When you think of biochemists developing drugs in a lab, you might imagine a team of white-coated professionals hunched over tables, pipettes in hand, to dispense minuscule droplets of chemical compounds onto slides. That process is called titration. If you imagined these experiments taking weeks and months of painstaking repetition and recording –not to mention a large margin for human error– you’d be right.

The way the discovery process at a typical drug company occurs, Dody explains, is that researchers have about a million molecules either extracted from nature or chemically produced. These small amounts of liquid are trapped in a tiny vial and kept in a freezer, and scientists use them to understand how molecular structures can act on disease. Dody says it takes “brute force” applying droplets one by one to a well plate–essentially a piece of plastic the size of a 3×5 index card covered with dimples that hold the compound.

“A researcher applies between 200,000 to a million drops of the compound to test against the disease target and they hope that 10,000 are actually hits,” Dody says. “Then they can determine what’s common between molecules and what’s the dose at which these drug molecules are causing a positive interaction with disease.” With precious little fluid and the need to create doses that span six orders of magnitude from one to one million concentration units in a process called serial dilution, Dody says 95 percent of the work and materials end up wasted. Not to mention that developing a drug this way can take up to 15 years and failed attempts can cost $1.5 billion.

***
It used to take researchers a half day to simply set up their experiment. Leveraging chips that HP developed in its fourth-generation printer, the company’s D300 allows biologists to “place” drops of experimental pharmaceutical drugs as “ink.” The process is called titration, and it’s commonly used in labs to determine the concentration of chemical compounds such as medications. 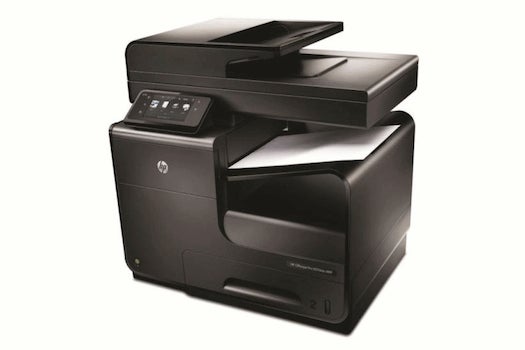 D300’s hardware dispenser looks like a printer but has a repurposed printhead along with digital titration software and thermal-inkjet chips the size of a pen tip.” The system uses 13 picoliter drops, which have one-third the width of a human hair. Why is that a good thing? Because it helps scientists figure out exactly which concentration works. Using D300, biologists can measure how much of a drug is needed to react on a diseased cell.

There were a handful of challenges to tackle before the instrument could be used in the lab.

One thing that had to be invented from scratch was a solution for “drooling” or puddling fluid from the compound. In a printer, this is solved through a spring or sponge inside the ink cartridge that creates suction to keep the ink from coming out through the nozzles. On the drug dispenser, there is just a 1 millimeter-by-2 millimeter piece of silicon with a cup on the backside that is open to the air to allow the researcher to pipe a big drop of fluid that will then be dispensed into 13 picoliter drops.

HP’s silicon research team was tasked with inventing a surface treatment or new geometry to stop the fluid from flooding the plate and interacting with the compounds. “It took us about a year to figure it out,” Dody admits. The team eventually produced two solutions but Dody says they weren’t able to reliably commercialize one because the materials were coming from a small company. “It wasn’t clear they would be available for many years,” he says.

Dody says he spent quite a few sleepless nights during this time. “If you didn’t find a solution you would have to make a hard business decision or scrap the project. The stakes were high,” he says.

The second solution they developed proved to be the charm. The D300 has an inert firing chamber, which takes care of the puddling issue as well as a disposable 1-millimeter-by-2-millimeter cassette so there is no cross contamination when the researchers try another compound.

“The scale of our core printing business allows us to make a refined tool at a cost that is cheap to [drug companies],” Dody says. “This is the first time the world has a reliable way to dispense at the picoliter level.”