How long until we can successfully 3-D print a whole human? 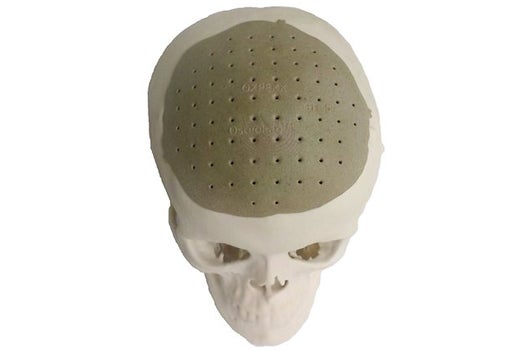 The rise of 3-D printing has turned body parts into a custom order. We can now 3-D-print customized prosthetics for everything from our hands to our ears. And now 3-D printing can even make you a new noggin.

Earlier this week, an unnamed man in the northeastern U.S. had 75 percent of his skull replaced by a 3-D printed implant made by Oxford Performance Materials, a Connecticut-based biomedical company. The replacement bone took only five days to fabricate, according to Scott DeFelice, the company’s president and CEO.

The FDA cleared the implant, called the OsteoFab Patient Specific Cranial Device, for use in the U.S. back in mid-February. 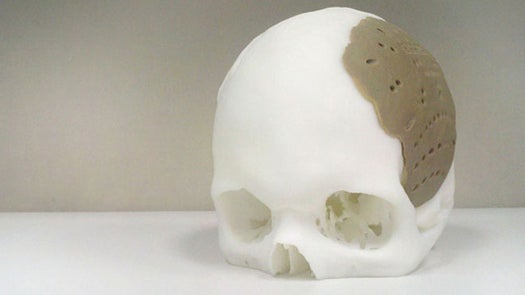 The implant, printed to match the patient’s skull, is made of PEKK, a biomedical implant polymer that’s mechanically similar to bone and is osteoconductive, meaning bone cells will grow and attach to small details on its surface. It doesn’t interfere with X-ray equipment — it shows up as a shadow on the image, but is transparent. This makes it a more attractive implant for tumor patients than a traditional metal plate that a doctor couldn’t see through on an X-ray.

The treatment could be used to replace cancerous bone in the skull, car accident victims and people with head trauma.

The company is now preparing to 3-D print bone implants for other parts of the body. DeFelice told PopSci the focus is currently on helping people with diabetic foot, which can cause the structural components of your foot to deteriorate and even lead to amputation. But “there is no part of the anatomy that ultimately won’t be affected by this technology,” he says.

As DeFelice told TechNewsDaily, “If you can replace a bony void in someone’s head next to the brain, you have a pretty good platform for filling bony voids elsewhere.”

Sounds good to me. Natural body parts are overrated — let’s all go as bionic possible instead. How long will it take before we can 3-D print our children instead of having to go through childbirth?