Someone Bothered To Look Up The Science Of Hating Anne Hathaway 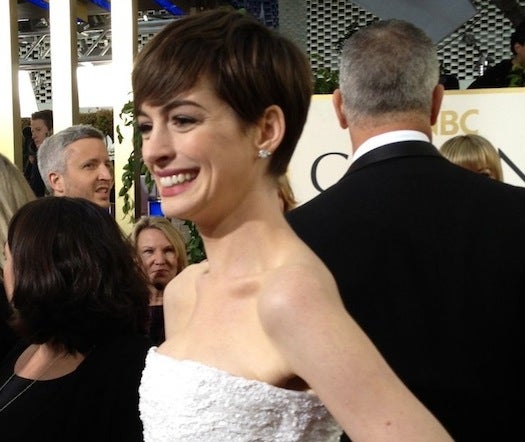 Anne Hathaway is the most despicable actress in Hollywood, according to the Internet, which used to hate Katherine Heigl and Shia Labeouf and every last Kardashian in pretty much the same way. The reasons for hating Hathaway are all over the map, but mostly they center on the notion that in public life she behaves like nothing so much as a robot built from scratch by the world’s most insufferable high school theater class.

Hating celebrities is something of a pastime. But for whatever reason all the Hatherade–my coinage; step off, Perez Hilton–surrounding the Oscars triggered a national spasm of bloviating and handwringing–what does it mean that America hates her so much?–with all the hootin’ and hollerin’ culminating in this: Someone tried to make a scientific case for why we loathe Anne Hathaway. From Salon’s Daniel D’addario:

But it may, indeed, be Hathaway’s face that fuels her haters, if only subconsciously: “When times are good we prefer actresses with rounder faces,” says psychology professor Terry Pettijohn, who has conducted academic studies on actress preference. “They convey these ideas of fun and youth.” Hathaway, on the other hand, has a “mature face” made distinctive by its slender shape and bone structure: “It suggests she would be popular when times are more challenging.” As the economy improves, Hathaway–whose peak of fame, post-boyfriend, pre-Oscar-hosting, came amid the 2008 economic crash–may just be a reminder of bad times.

So we hate her face? And we hate it because we’re rich? Well, at least there’s one thing in the world more insufferable than Anne Hathaway.