Was Iran’s Monkey Launch A Fake?

Space Israel alleges that the monkey Iran launched into space wasn't the same monkey they showed the world on Monday. Did Iran present us with an impostor? 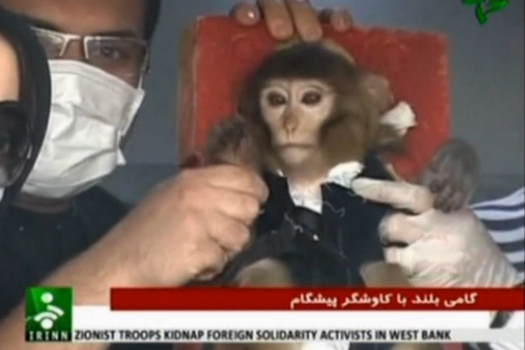 On Monday, Iranian state television announced that the country had successfully launched a monkey into space and received him back safely, an event the world regarded with a mild dose of skepticism. The country has been known to embellish in the past, as we pointed out on Monday.

But the existence of a potential rocket launch worried other countries, as the technology used to propel an adorable primate into suborbital space could also be used for nuclear weapons. Now The Telegraph is reporting that the monkey held up to the media as a successful space traveller looks nothing like the one shown prior to launch.

For one thing, there’s the case of the missing mole: The monkey shown strapped into a rocket in photos had a red mole over his right eye, but the “returning” monkey did not. The original monkey also appeared to have lighter hair.

The founder of Space Israel, a non-profit organization determined to send an unmanned Israeli space ship to the moon, hypothesized that the actual space-faring monkey might have died of a heart attack or “that the experiment didn’t go that well.”

According to The Telegraph, international observers have decided either the poor guy died in space, or the launch never occurred at all. However, what is undoubtedly true is that there is now video of a monkey wearing a tuxedo at a press conference.