Mystery Animal Contest: Who Is This Colorful Creature? 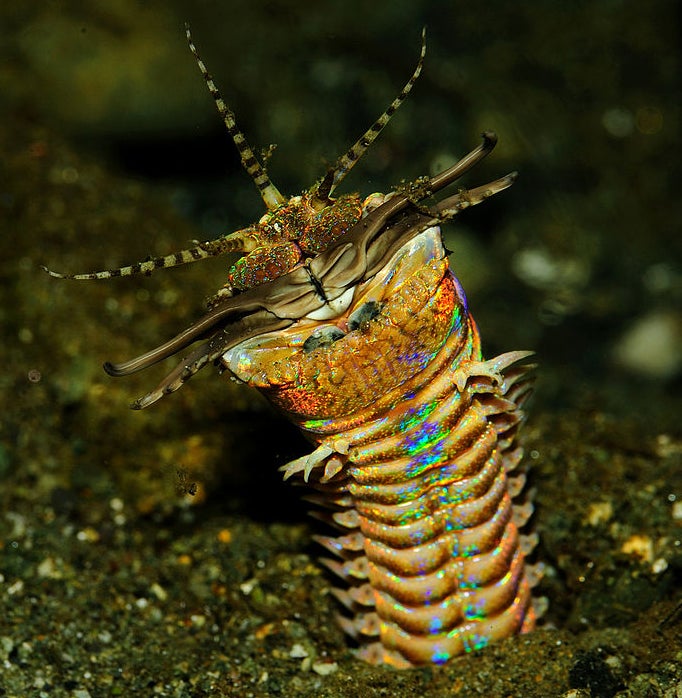 Update: And the winner is… @atanas_tanevski, who correctly guessed that this is a Bobbit worm, Eunice aphroditois. We love all animals here at PopSci, but if there was one that represents our nightmares, it’d be the exceedingly strange and terrifying Bobbit worm. It’s an oceanic predatory worm, living in the warm waters of the Indo-Pacific Oceans. What you see up there is barely the head of the worm–it commonly reaches lengths of 10 feet (!). Those things branching off the side of its head aren’t tentacles or whiskers, they’re jaws, which the Bobbit worm uses to leap up and snatch fish, which it drags down into its watery home. Oh, and it’s covered in venomous spikes that cause permanent numbness in humans. It’s no wonder the Bobbit was the inspiration for the sandworms in the movie Dune.

The Bobbit worm lives under the seafloor, but it’s very adept at hiding despite its large size, so when rocks or coral are dredged and sold to aquariums, some people find themselves playing host to a Bobbit. One Australian aquarium had this issue–it found that some mysterious force was eating all its fish, chomping straight through coral and making quick work of any traps they’d set. Turns out it was a four-foot Bobbit worm.

Very little is known about the Bobbit worm, really. We have no idea about its mating habits or lifespan, though it’s suspected due to the unusual length that it may live for a very long time. Anyway, say hello to your new nightmare. Hi Bobbit worm!