As The Earth Warms, The Lure Of The Arctic’s Natural Resources Grows

Under the thawing Arctic ice lies bounty that could fill mouths, and pockets, around the world. 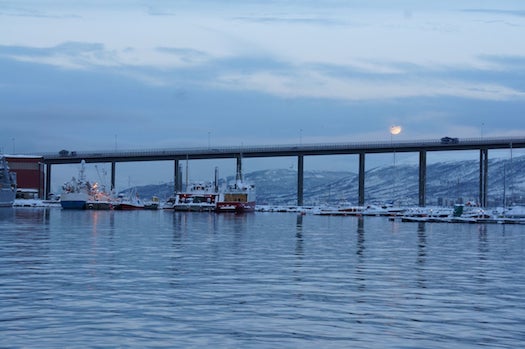 For all the concern among scientists, environmentalists and others about how melting ice in the Arctic could wreak havoc on local ecosystems, the loudest message about climate change among politicians and energy industry officials who spoke at the Arctic Frontiers conference in Tromso recently could be summed up as “Bring it on!”

DISPATCHES FROM THE ARCTIC

This series explores the science and implications of global warming in the North Atlantic Arctic. This is the final installment from Boulder-based writer Susan Moran.

This optimistic, even celebratory, outlook on the expected impacts of global warming on the High North–which is warming faster than any place on Earth–runs counter to what most scientists and environmentalists say is unfolding there. But then again, under the thawing ice lies bounty that could fill mouths, and pockets, around the globe.

Steiner Vaage, president of ConocoPhillips Europe and Chair of the Norwegian Oil and Gas Association, expressed the mood of optimism as clearly as anyone. “There are 80 million people joining the global middle class each year,” he said. “The world needs more transportation and electricity generation. We believe more energy sources will be needed in future, including in the Arctic.” Mead Treadwell, Lieutenant Governor of energy-rich Alaska, added, “The Arctic can truly can feed and fuel the world.”

Let me clarify first that defining the Arctic is a taxing proposition. Geographically it is often defined as areas north of the Arctic Circle (latitude 66 degrees, 32 minutes North, according to the National Snow and Ice Data Center). But that demarcation would exclude a large swath of Greenland and ice-covered stretches of Canada. Some researchers define it as north of tree line. But the Arctic is defined in political as much as in scientific terms. Which explains why some national leaders at the conference said that 4 million people live in the Arctic, while others claimed 9 million live there.

One thing everyone, at least at this conference, seemed to agree on was that the High North boasts a treasure trove of natural resources that are up for sale to the highest, quickest, or luckiest, bidder. The Arctic holds 13 percent of the world’s undiscovered petroleum and 30 percent of the world’s undiscovered natural gas, as Vaage of ConocoPhillips noted. Of the total undiscovered reserves in the Arctic roughly 84 percent is expected to occur offshore, according to the U.S. Geological Society.

To date, most of the offshore oil and gas activity is explorative. Offshore activities are currently taking place in eastern Canada, Russia’s Sakhalin, and Norway’s portion of the Barents Sea. Most if not all of the eight members of the Arctic Council, including the United States, are already extracting or are planning to extract resources there. China is aggressively angling to obtain permanent observer status on the Council so it can wield more political and financial influence as it seeks out rare earth minerals and fossil fuels in Greenland and elsewhere in the region.

Alaska is also producing from offshore fields, but mainly through extended reach from shore and/or artificial islands, according to Rystad Energy, an Oslo-based research firm. Royal Dutch Shell began drilling pilot holes into the seabed of Alaska’s Chukchi Sea last September. But its Kulluk oil rig ran aground in near-hurricane conditions on New Year’s Eve. Although no oil was spilled, the mishap triggered an outcry among environmental groups and put the company’s plans–and offshore oil drilling in Alaska’s Arctic in general–on the back burner.

Onshore oil and gas production in polar regions has been underway for some years, including in Siberia and Alaska’s North Slope. But energy players are eyeing potential bounty offshore in the future as the Arctic is warming faster than any other region on the planet.

Some speakers at the Arctic conference, which ended last Friday, painted a more tempered picture of the economic opportunities from a thawing Arctic. “A surprising thing happened on the way to the oil and gas boom,” said Heather Conley, a senior fellow and director of the Europe Program at the Center for Strategic and International Studies in Washington. She was referring to the discovery and extraction of unconventional shale gas in North America, thanks largely to the controversial process called hydraulic fracturing, which has expanded production and dropped prices of natural gas and made arctic hydrocarbons less cost competitive. “I’m not convinced oil and gas is the Arctic story.” Conley, like some others at the conference, also said that mineral development will likely play a bigger role in the future in the Arctic.

Rystad Energy expects that natural gas developments in the Arctic will not be able to compete with onshore shale gas. The firm predicts that any development seems unlikely before 2030, and possibly beyond, according to Jarand Rystad, founder and managing partner of Rystad.

Several major energy projects that had been scheduled or started in the Arctic have been shelved in recent months. For instance, last August Russian President Vladmir Putin announced that the state-owned energy company Gazprom was stopping a $15 billion expansion of its flagship Shtokman gas field in the Barents Sea. He blamed the pullout on soaring production costs, falling gas prices due to the boom in North America, and dwindling demand from Europe as its economies suffer. In another example, Statoil, the Norwegian energy company, last October halted production at its Snohvit (which translates to Snow White) gas field in the Barents Sea offshore from Hammerfest, the northernmost town in the world. Statoil and its partners agreed that there was not enough gas to justify further investment in what is Norway’s first energy project in the Arctic.

No doubt, the Arctic and its hidden riches will continue to lure nations and indigenous communities as melting ice makes them more accessible. But the “race” that many speak of to tap and cash in on its resources looks more like a hike than a sprint, at least for a few years. That time will be necessary, environmentalists argue, to ensure that extracting the region’s natural riches, especially way offshore, will be anything but risky business.

“Accidents happen. The Arctic is not a forgiving place,” said Martin Sommerkorn, who coordinates climate change activities for WWF’s Arctic Network Initiative, in an interview at the conference. “We can’t allow ourselves to make these mistakes. This means we must tread carefully. …For marine development of oil and gas I don’t think we’re there yet.”