How does a beatboxer produce such a wide range of percussion sounds? 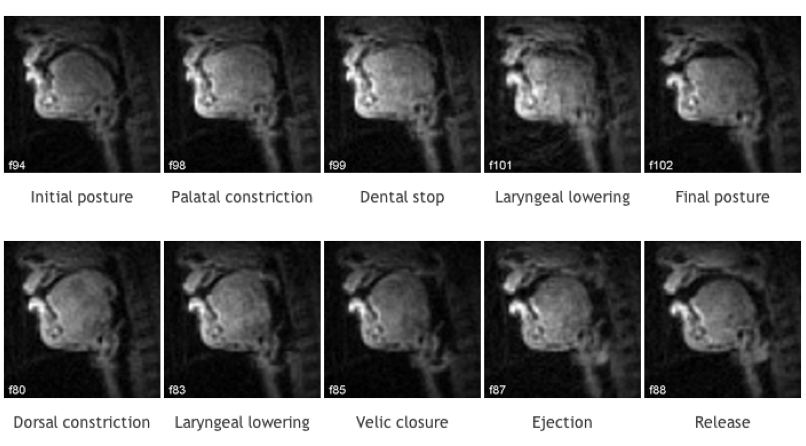 Top is a "closed-kiss hi-hat," and bottom is a "rim-shot" effect, like a snare drum. University of Southern California
SHARE

Because why not, a group of linguists and audio engineers at the University of Southern California put a 27-year-old MC in an MRI and watched him beatboxing. It explains some of the physiological mechanisms enabling beatboxers to sound like snare drums, bass lines and squeaking records, just by using their voices.

USC researchers Michael Proctor, Shrikanth Narayanan and Krishna Nayak wanted to document the range of sound effects a beatboxer produces, and examine the way performers use their vocal cords to change air flow and sound patterns. They made 40 recordings with the beatboxer, who has been an MC in a rap duo since 1995 and is a native English speaker with Spanish fluency. The subject was asked to demonstrate his skills while the team recorded him with a real-time MRI scanner, developed specifically for studying speech.

You can credit Doug E. Fresh and Darren Robinson with the genesis of beatboxing, and Biz Markie and Rahzel with even more advanced sounds that mimic percussion while also singing.

Studying this L.A.-based beatboxer, the team noted 15 different phonetically distinct sound effects, like “snare clap,” “hi-hat” and “kick drum.” The sounds used by beatboxers mimic those found throughout the world’s languages, according to Inside Science News Service, which first reported the research. Some of the sharp percussive sounds were similar to the clicks found in African languages Khoekhoe, from Botswana, and Xhosa, from South Africa. Some of the “ejective consonants,” formed by closing the vocal cords, are found in Nuxálk, an indigenous language from British Columbia.

But beatboxing is a highly individualized art form, so the researchers say further study with different beatboxers would help them better understand the muscles involved. The research will appear in a forthcoming issue of the Journal of the Acoustical Society of America.