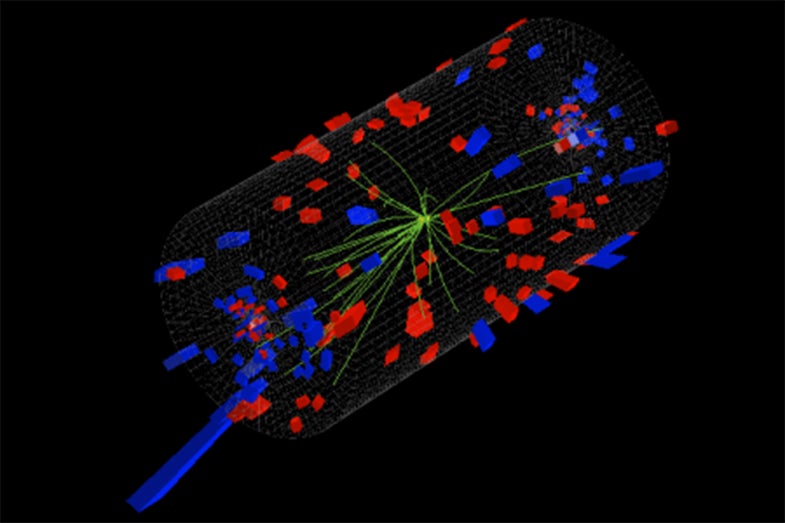 This visualization from the CMS collaboration depicts a proton colliding with a lead nucleus, sending a shower of particles through the detector. CMS/CERN via MIT
SHARE

Some unusual new physics may be emerging at the Large Hadron Collider, where particles are behaving in a surprising way. Collisions between protons and lead nuclei might be forming a new type of matter that relies on quantum entanglement, according to particle physicists.

The Compact Muon Solenoid, one of the two major-magnet particle detectors in the LHC, has been busy smashing together lead ions and protons. When particles collide at incredible energies, they blow apart into their constituent pieces, and physicists look for those building blocks in the shrapnel. This is how LHC scientists found the Higgs boson this summer. (In this new case, the scientists were looking for particle behavior, not necessarily new fundamental bits.)

The shrapnel usually flies out in all directions, at speeds approaching that of light — but sometimes, the exploded bits do something different. They fly away from each other but in an orderly fashion, correlated with each other. This has been seen before in proton-proton collisions, and also in collisions between the nuclei of heavy metals like lead. In the heavy ion collisions, this correlation makes some sense, because physicists think it’s the result of something called a quark-gluon plasma. This roiling soup of particles is the same primordial soup that existed for the first few millionths of a second after the Big Bang. The soup gathers particles together and pushes them in the same direction. Similarly, in proton-proton collisions, the particles are thought to be swept up in something called a color-glass condensate, which also behaves like a wave of gluons.

Now CMS scientists say this directional correlation has happened in proton-lead collisions, too. This was a surprise. It may have something to do with quantum mechanics, according to MIT.

“Somehow they fly at the same direction even though it’s not clear how they can communicate their direction with one another. That has surprised many people, including us,” MIT physics professor Gunther Roland, whose group led the analysis of the collision data, told MIT News.

In September, CMS members cranked up the particle accelerator to a little more than half its full capacity and started colliding lead nuclei with protons, looking for these two-particle angular correlations. In a sample of 2 million lead-proton collisions, a few pairs flew apart with their respective directions correlated. How?

The LHC and other particle colliders are all about accelerating particles to give them more energy, which equates to more mass. This allows them to get “heavier” so more shrapnel comes out when they blow apart. But this also introduces some changes to the particles’ behavior. Namely: Normal protons have three quarks, but when protons speed up and get heavy, extra gluons glom onto them. These gluons exist (as all particles technically do) as both particles and waves. Their wave functions are correlated with each other–they’re entangled, as MIT News explains it. This quantum entanglement, spooky action at a distance, explains how particles that fly away from each other can have shared behavior.

Why care about all this? The result wasn’t expected at all–the CMS team ran some proton-lead collisions for the purpose of getting better control data. So that’s interesting. But more fundamentally, it suggests some newly understood behavior at the tiniest levels. Refining our understanding of how quarks and gluons behave within protons will improve our understanding of the building blocks of all matter, and how it behaved right after the Big Bang. Just the sort of science the LHC was built for.