Pumice-like cratery indents formed by ancient raindrop splats are adding to the mystery of why the adolescent Earth was warm... 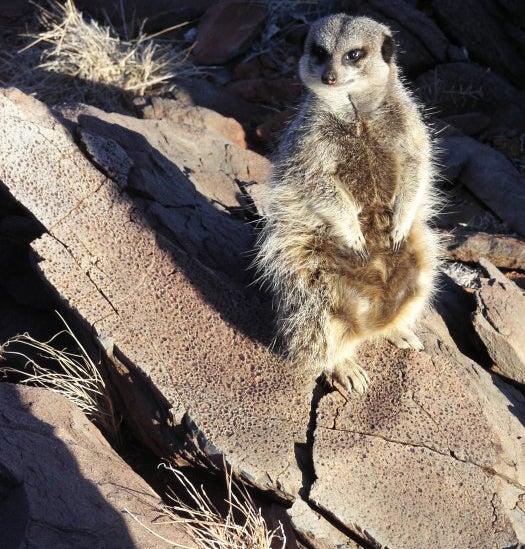 Pumice-like cratery indents formed by ancient raindrop splats are adding to the mystery of why the adolescent Earth was warm enough to host rivers and oceans, despite the dim sun of the day. Thanks to fossilized impressions from rains that fell down on Africa 2.7 billion years ago, the “Faint Young Sun” paradox is getting curiouser and curiouser. That’s right, 2.7 billion-year-old raindrops. And you thought spring showers were ephemeral.

During the late Archean era, around 2.7 to 2.5 billion years ago, the sun was roughly 20 percent dimmer than it is now. This lower solar radiation should have encased the Earth in ice, but geologic evidence is to the contrary, suggesting that either greenhouse gases, a different atmospheric pressure or both kept things warm. Raindrop physics can help answer the question.

Raindrop impression sizes depend on the velocity of the drop, the material it splatters onto, and the pressure of the atmosphere it falls through. At the surface, raindrop splats won’t be any larger than a quarter-inch in diameter, pretty fat rain by any standards. Today, these fat drops’ terminal velocity is roughly 30 feet per second. But if the ancient atmosphere was thicker, they would have fallen more slowly, and their impressions would therefore be smaller.

Now to find fossil raindrops to test this theory. There are some impressions in volcanic ash from South Africa, apparently, and researchers at the University of Washington set out to measure it. They poured latex over the rocks — seen above with a bonus meerkat on them — and then peeled it off. They scanned the peels with a laser to precisely study their sizes and shapes.

Then, UW Ph.D student Sanjoy Som, now a researcher at NASA’s Ames Research Center, made some model rain. First he and his colleagues collected ash from the 2010 eruption of Iceland’s Eyjafjallajökull volcano. Then Som and civil engineering student Peter Polivka took some pipettes and squeezed droplets of water down an open stairwell, dripping 90 feet down into volcanic ash they had placed on the floor. Then they sprayed hair spray on it to harden the impressions. After this, they made further laser scans and compared them with the South African raindrops.

Based on raindrop impression sizes, Som and colleagues determined the atmospheric pressure 2.7 billion years ago couldn’t have been more than twice what it is today. But it’s even more likely that it was the same. So the Faint Young Sun paradox remains unsolved, thanks to some persistent raindrops.

The study appears in the early online edition of Nature.